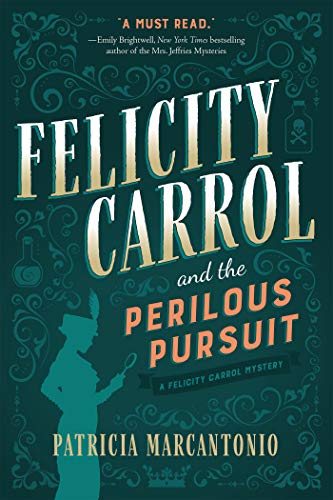 “Marcantonio really does an excellent job of keeping her protagonist one step ahead of the reader, . . .”

Felicity Carrol is not what her father wants her to be. In Victorian England, young, well-to-do women follow their fathers’ direction and find a mate well placed in society. They marry and produce a large brood of children, but “Felicity felt distanced from the world of Carrol Manor, her father’s world, and his expectations for her.”

That’s not what Patricia Marcantonio’s main character, Felicity Carrol is about to undertake! Well educated, much to her father’s chagrin, Felicity is independent, and follows her own lead, but she recognizes the walls that she is up against. “. . . at the University of London . . . even though the institution had been the first in England to admit women to work toward degrees . . . many of the male students continued to gawk at Felicity’s attendance.”

Unfortunately for her, Victorian England looks askance on independent women, and Felicity finds it difficult to be accepted.

When her mentor and friend, William Kent, is brutally murdered, she takes it upon herself to find out who did this awful deed and make them pay for it. But her investigation brings her up against Scotland Yard Inspector Jackson Davies, who will brook no interference in his own investigation.

Regardless, if Inspector Davies cannot see beyond his own masculine eyes, she will proceed alone.

One of the most unusual things about this crime is not only the theft of a priceless manuscript about King Arthur, it is that Felicity determines Kent knew his murderer and with his last breath tried to leave a clue to the killer’s identity.

Within days of Kent’s murder, a second murder occurs. Viscount Richard Banbury is brutally murdered in his home, and although there is little reason for Felicity to connect the two, there is one small connection: a priceless antiquity of the King Arthur age was stolen from Banbury’s home.

As she digs deeper into these murders, Felicity discovers that Kent and Banbury were related—not only to each other, but to Queen Victoria. Again, as Felicity conducts her investigation, she comes face to face with Inspector Davies. Adversaries, indeed, and yet there is something that draws them together, although neither will admit it.

As Felicity follows the scraps of clues she has gathered, a third murder occurs. Wealthy acquaintance of Felicity’s, Elaine Charles, is found dead in her home, and a priceless medieval painting has gone missing. The web is beginning to tighten.

All is not good at home for Felicity. Her extremely wealthy father is distant and has no patience for her interference in matters that are not a woman’s business. He demands that she attend a ball where she can be seen by eligible bachelors.

Unhappy with this situation, she nonetheless acquiesces to her father’s wish, and at the ball she sees the attractive Duke Philip Chaucer, another relative of the queen. Felicity does not meet this attractive and charming young man, as she finds herself in a position of rejecting a suitor, much to the anger of her father.

Further study of three murders that appear to be related, and Felicity determines that a fourth victim is about to be slaughtered, but before she can get to the man and warn him, he, too, is murdered. Enter Inspector Davies whose plate is full of murders, and he must still deal with the meddlesome Felicity.

Marcantonio brings her characters to life through vivid storytelling. Felicity is especially engaging as the protagonist. An independent, well-educated, wealthy woman, she is gifted with a flawless memory, absolute recall of everything she has encountered throughout her life.

The story moves quickly, it never wavers or moves off point. Clues are cleverly positioned for the reader to find. And although Felicity feels no need to have a man in her life, she finds herself with two: Inspector Davies and Duke Philip Chaucer, one a working man’s man, the other a wealthy member of the royal family.

And yet, attractions aside, Felicity continues to follow the clues laid out in front of her until she finds herself on the receiving end of an attack that almost ends her life. Felicity realizes the attacker is not the actual murderer of the four victims, and he refuses to name that person, so Felicity is no closer to solving these crimes than she was with the first one.

When her clues lead her to the surprising conclusion, she realizes that the murders are not finished and the next victims are to be Queen Victoria and her family. Felicity can’t share her information with the inspector because he just would not believe her, and so she must face down the killer herself, and do her best to save the queen.

Marcantonio really does an excellent job of keeping her protagonist one step ahead of the reader, while still giving the reader all the clues. It does, however, become obvious who the killer is, just a few steps before Felicity determines the identity, and yet the story continues to be intriguing to see how Felicity will resolve the problem and dispatch the killer.

Felicity Carrol and the Perilous Pursuit is the first in this series, and if Marcantonio continues in this vein, she will have a good series with many fans.