Feldstein: The MAD Life and Fantastic Art of Al Feldstein 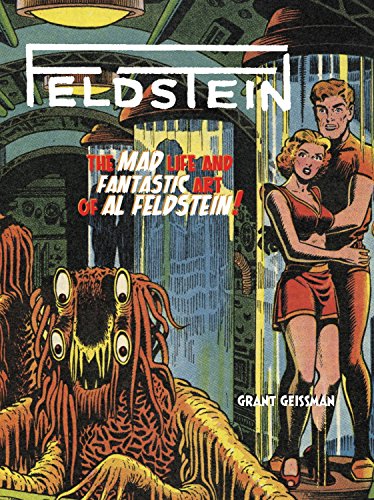 It is impossible to find fault with a book featuring:

* Scenes of space that inspire NASA, Film designers and other artists to be better,

* Robots serving as traffic cops in a congested city,

* Vultures finding dinner in a desert, and

* Some of the most beautiful western-themed oil paintings imaginable.

This is just a fraction of the imaginative beauty that Al Feldstein has created, drawn, painted, written, or edited over his lifetime.

Author and historian Grant Geissman misses nothing as he writes of not only a man’s life, but the effect that his work has had on the people he met as well as the times he loved in.

Beautifully illustrated with hundreds of full color reproductions of complete stories, unseen pages of comic art, memorable covers, photographs, advertisements, original art and much more, the book is a true find for anyone who loves comics and art.

As his later success on memorable EC titles such as Crypt of Terror and Haunt of Fear would prove, Mr. Feldstein always seemed to go a little further with in his creations than others were willing to do. And he did much of it with a grand sense of humor.

A gifted artist who enjoyed oil painting before moving into comics, his early work on such teenage titles as Adventures of Homer, Master Marvin, Junior and Johnny Prep, Mr. Feldstein’s work is definitely risqué for the times.

The women he drew are voluptuous with perfect posture, well dressed with skirts that often float a slim inch above the knee or even more and are often seen wearing fashionable heels that would look perfect on the runway even today.

Seeing the original art for stories such as forgotten stories as Dime-A-Dance hostess or Shame! showcases why, even at the start of his career, Mr. Feldstein’s art was so exceptional. There is nothing half-baked in anything the man ever drew.

This work leads him to the company where Mr. Feldstein enters into his most critically revered period, EC Comics. Working with publisher Bill Gaines, the two men begin one of the most influential partnerships in the history of modern media.

The covers and stories Mr. Feldstein created for EC have gone into legend. There are coffins, werewolves, skulls, men being stretched on racks, ghouls, murder, glorious views of space and other worlds, corpses coming back to life, hands reaching from a grave to kill again and more often than not, stunningly beautiful women.

While the story of EC is at the center of Mr. Feldstein’s life, Mr. Geissman never ignores the realties of the artist’s life. With taste and restraint he writes of difficulties at home while keeping a balance with life in the workplace.

As sales rise at EC, they need more artists and writers. It is Mr. Feldstein who ends up in charge of almost all the books with the exception being the War titles and a brand new humor comic book known as MAD.

The creation of the gifted, but meticulous and nearly uncompromising Harvey Kurtzman, the company stays with MAD for four issues until the fifth strikes gold with the public.

Eventually the content of books published by EC, and that of lesser publishers as well is starting to attract notice from educators and the public. As a result of the constant attacks from outside, EC has to eventually cancel their horror titles.
It is Mr. Feldstein, working as he always has with Mr. Gaines on plot ideas, who leads the development of new titles such as Piracy, Aces High and Psychoanalysis to replace the canceled books. They fail to sell.

Ever resourceful, Mr. Feldstein then develops a memorable new idea of text and art books called “Picto-Fiction” They fail as well. As a result, Mr. Feldstein and much of the staff is let go.

ECs lone, remaining success is MAD. to escape growing censorship in the comic field, MAD becomes as a magazine.

But Mr. Kurtzman’s growing financial demands as well as his inability to meet deadlines quickly become unreasonable for Mr. Gaines. He shows Mr. Kurtzman the door and pulls Mr. Feldstein back in as editor.

Within a year MAD was back on deadline and making even more money.

Mr. Feldstein instinctively understood that readers enjoyed continuing gags such as Spy vs. Spy, Af Jaffee’s Fold-In or the Lighter Side of Dave Berg. His most important contribution may have been the decision to bring Alfred E. Newman to the forefront as a mascot.

For the next few decades Mr. Feldstein cultivates and guides the magazine until it become a part of the social fabric of America.

In retirement he has returned to oil painting. In stunning detail he brings country such as Yellowstone, The Grand Tetons, and Jackson Lake to vivid life. His portrayal of landscapes Native Americans and wildlife is filled with heart and deep respect for what he sees. His paintings, including recreations of work he did at EC, are highlights of auctions for Sotheby’s and other sellers.

His covers and stories are among the most beautiful and disturbing ever created. From his art to his leadership as an editor, Mr. Feldstein is among the greatest to have ever worked in the field. Mr. Geissman gives his life the celebration it deserves.