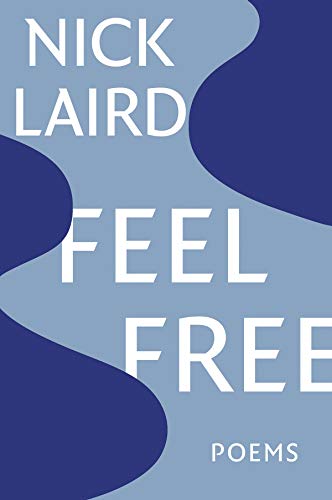 There’s a lot to be learned about Nick Laird and his poetry just from stopping with his title for a minute or two. First, there is the simple, colloquial casualness of the words. We all know them, even if we realize we know them because they sound so good. There’s that simple alliteration, the almost rhymes of those long “ee”s, the similar length and shape of the words.

And then there are all the things they could mean: “Feel free” as in “Make yourself at home.” “Feel free!” in the imperative, a demand that you recognize something about the condition you live in. “Feel free?” in a skeptical way, questioning the possibility of freedom in a culture shaped by imposed messages and a system of values shaped by commodities.

Then there’s also the simple fact that this book was released in England about the same time as Laird’s wife Zadie Smith’s most recent book of essays. It’s title, of course, was Feel Free. Their comfort with this duplication says something about their relationship, and that too becomes part of this book of poems.

These various attitudes toward the possibilities of language play out in interesting, often powerful ways throughout the poems. “Grenfell” is an elegy for the 72 people killed in the 2017 Grenfell Tower Fire in London. Laird is angry, but his poem uses neither the expected language of anger, nor the clichés of grief. The grief and anger of the poet are both suggested by the use of language that could have been generated by a computer, the kind of language we all run across in on-line surveys.

“How satisfied are you with customer support?

Please evaluate the final minutes for how one

The outrage is partially contained in the reader’s reaction to the neutrality of the language.

Likewise, near the end of the book, the poem “Extra Life” recounts the horror of the recent immigration crises in both Europe and the U.S., but it is all told as if it were directions to a new computer game. The poet doesn’t need to belabor the irony of this:

or held for an indefinite term

in a ‘processing facility’.

and merge with the foot passengers.”

There are other, very different poems in this collection, poems that refer directly to Laird’s family, both his parents and his children. Here he doesn’t use the kind of language and irony that he plays with in his poems of cultural or historical anger. In these poems the language is saved from sentimentality by its unadorned directness.

In “Silk Cut” the poet remembers walking in Dublin with his father when he was a child and, when he tried to take his hand, he was burned by his father’s cigarette. Now, as the father and son walk out to a pub after the death of a family member, the poet writes, “I have to stop my hand from taking his.” It is fairly certain that “Silk Cut” will start appearing in anthologies of current Irish, British, or even American poetry in the near future.

Nick Laird is from Northern Ireland, was educated in England, and now teaches in the U.S. He is one of that post-Seamus Heaney generation of writers who use the language and landscape of Northern Ireland but who look to a much larger international audience. They are a group of poets distinguished by the seriousness with which they practice their art, a seriousness that allows—as Nick Laird shows us in Feel Free—a range of emotions that can include even laughter.