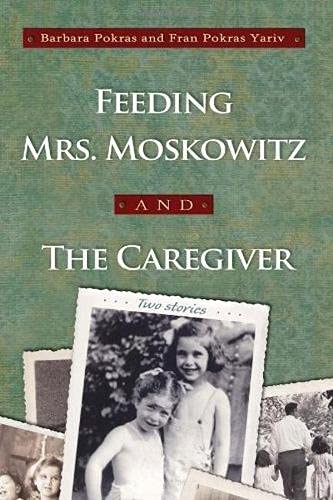 This charming book consists of two novellas; the first is Feeding Mrs. Moskowitz, written by Barbara Pokras and the second, The Caregiver, is written by her sister, Fran Pokras Yariv. Golde Moskowitz is a careful woman—she wraps the strap of her pocketbook ’round her wrist three times and locks the door from both inside and out—until one morning, when she gets knocked down by Natalie Holtzman’s car. Golde is an elderly Russian immigrant and Natalie is a thirtysomething graphic designer.At the hospital, Natalie feels responsible for Golde and pretends to be her daughter in order to find out how the older woman is. This gets her the job of taking Golde home after she’s discharged, and sets up an ongoing relationship between the two women, which develops into something which isn’t quite “mother/daughter” in a conventional sense, but more “daughter/mother” in an emotional sense. Golde likes men, she trusts them more than women—they know how to do things and they listen to her—while Natalie is in therapy, trying to come to terms with the death of her mother, less than a year earlier, and is being preyed upon by her noncommittal boyfriend, Artie.  Set in the heat of a Los Angeles summer and with point-of-view switching between the two women, Feeding Mrs. Moskowitz chronicles the anxieties of both age and angst with stunningly surreal metaphor and de rigueur plain-speak. It’s easy to see why the women would like each other, as both characters are very attractive. Golde is naively pragmatic and embraces an ability to communicate internally with a kind of cosmic duality, which is almost, but not entirely, religious. On the other hand, Natalie is sophisticated but unstable and can’t quite come to terms with her spirituality. Golde is delightfully confused and deliciously forgetful, while Natalie is disquietingly vulnerable, despite being meticulously organized. But despite their seeming disparity, the women are alike in more ways than one. Their affinity for each other, after the initial shock of their meeting, grows at the speed of a hospital trolley in an emergency ward. Both are haunted by guilt and both long for connection—a place to belong—and the opportunity to redress the past. Things become merrily complicated when Golde gets lost; and there is a sequence of extraordinary coincidences and little miracles and psychedelic “happenings” leading up to the resolution, which comes in the epilogue. Although not totally unanticipated the conclusion is, nonetheless, both sudden and satisfying. Yet to offer the small criticism that some of the plot might be a little contrived and corny at times could be interpreted as slightly disingenuous, as this is more than made up for by the simple harmony and humanity of the story. The second story, The Caregiver, is a little less literary in style than the first. It consists of a series of well-crafted vignettes documenting the intriguing lives and back-stories of the staff and aged residents of Sunset Hills, an exclusive residential retirement home in Hollywood. There is Ofelia Hernandez, a private caregiver, who is almost thirty and who keeps a daily journal and looks after little Mrs. Breur for her demanding daughter, the formidable Ms. Breur-Gordon. Or Emma Greenberg, a plain-speaking ninetysomething, who hates “being on someone else’s schedule” and is a little anarchic and sometimes downright “ornery.”  Then there’s Lily Arthur, who gives away her red Buick to Alex, a handsome waiter and, as a result, is left to die. Hannah Ostrow, who keeps waking earlier and earlier and escapes to the outside world for a day. And Louise Draper, who has sexual intercourse with The Captain, with surprising results. Little things assume huge proportions at the Sunset Hills Retirement Community—things like taping notes of complaint to the Community Director’s door, particularly as Janice, the CD, runs the retirement home much as Nurse Ratched runs the mental institution in One Flew Over The Cuckoo’s Nest.The naiveté of the narrative is disarming, and seductive in its portrayal of the methods whereby the destinies of old people are taken out of their hands by others who, intentionally or not, have their own agendas. Both stories are essentially female in their genesis, and I felt vaguely voyeuristic reading them. Nevertheless, the sentiments expressed are not intrinsically nor exclusively feminine and are certainly androgynous in their humanity and integrity. The novellas are beautiful little parables which are not just meant for caregivers or for the children of the elderly, but for everyone—as most of us will, eventually, take similar journeys to those taken by the residents of Sunset Hills, in one form or another.