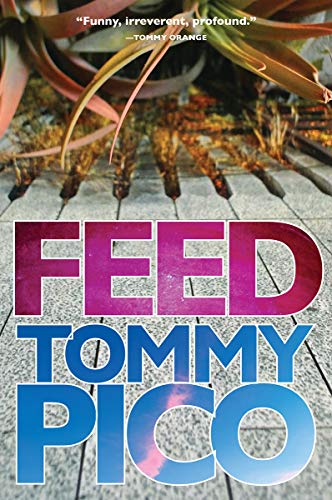 “Feed is a brilliant contemplation of love seen through the lenses of food, pop culture, and raw emotion.”

Feed by Tommy Pico is the final installment in the Teebs tetralogy. If Junk was a book-length break-up poem, then Feed is equally a love poem. It begins with Pico’s unbridled infatuation with Leo as they walk on the Meadow Walk of New York’s High Line park.

candy And what is candy, but a crush?”

As is to be expected with the Teebs series, the poetry pushes forward with a delirious intensity. Pico infuses the poem with pop culture references, puns, and personal confessions. The title also operates as a pun, Feed being a meditation on food and “feeds” (social media, news, and otherwise). America is the land of both consumer and data gluttony. Like a social media feed, Feed offers a barrage of material as eyes travel up and down the pages. For the purposes of a book review, this information will be distilled into an inventory: recipes, dating profiles, tirades, wishes, dreams, track listings, direct addresses to the reader, and plant names in Linnaean nomenclature. It all seems quite random and clinical in list form, but the poem provides a wholly different experience.

Pico’s poetry synthesizes the raw experience of modern life with his own personal history, his tribe’s history, and the history of the United States.

“I grew up on a food

of dust on the map of the United

where the average age of death is 40.7 years old.

“I live in the busiest city in America.

“I am about to eat an orange.”

His membership in the Viejas Indian reservation of the Kumeyaay nation, is located outside San Diego, the same city that hosts Comic-Con International. These collisions of culture, economics, and personalities propel the poem forward. Part recipe book, part rant, part mix tape, Feed embodies the confusion, rage, and impotence of the late 2010s. Like a social media feed, it seems both endlessly digressive and tautly constructed. He will have lengthy meditations on love and life and then have it interrupted by news headlines in shouted full caps.

I will always remember you

in the artery of the 5 shunting

“into the city’s heart

bc usually I take the bust

I mean bus from Portland”

Like Jon Stewart in the early 2000s, Pico uses his voice and his poetry to become a beacon of reason and decency, especially in light of the racism, incompetence, and vulgar stupidity of the last presidency. Pico’s common human decency is reflected in the poem, a stark contrast to the sanctimonious obscenity of American conservatism and the grotesque morality it enshrines. One of the threads woven into the poem is Pico’s parallelism between finding a potential planet for colonization and his browsing dating profiles.

“The Earth Similarity Index (ESI) is a number calculated from an

It ranges from 0 to 1, and any planet above the score of .8 could be

considered ‘Earth-like.’ So we find an exo-planet Luyten b.

Then it turns out his favorite book on OkCupid is Atlas Shrugged.

Can’t do it sorry Next planet.”

Feed is an extended riff, a musical arrangement of multiple registers and themes. It is also an intensely personal confession, a poetic bio-exorcism, a tirade against all the twisted -isms and -ologies that have poisoned and cursed American civilization. Despite the heavy subject matter and crippling weight of tragedy, Pico persists, with irreverence and silliness. The silliness, like sea salt on chocolate, only enhances the poem’s power. “Listening to a podcast on malnutrition / at the Whole Foods / hashtag late stage capitalism.”

Yet Feed is only one aspect of Pico’s multifaceted career. Beyond the many awards, “he splits his time between Los Angeles and Brooklyn” and “co-curates the reading series Poets with Attitude (PWA) with Morgan Parker at the Ace Hotel, co-hosts the podcasts Food 4 Thot and Scream, Queen! and is a contributing editor at Literary Hub.” Feed is a brilliant contemplation of love seen through the lenses of food, pop culture, and raw emotion.

“A sauce is broken when the oil separates