Fear Your Strengths: What You Are Best at Could Be Your Biggest Problem 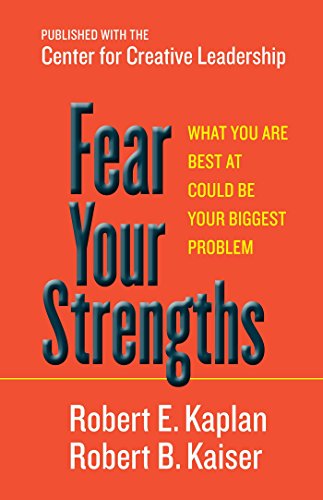 Many years ago Peter Drucker proclaimed, “Most American managers don’t know what their strengths are.” In recent years a veritable cottage industry has emerged to help determine strengths through testing, profiling, developing, managing, coaching, and more.

Robert Kaplan and Robert Kaiser convey their central message in the title of their book: Fear Your Strengths: What You Are Best at Could Be Your Biggest Problem. They write, “We have concluded there are two core dualities that confront all leaders: the need to be forceful combined with the need to be enabling, and the need to have a strategic focus, combined with a need to have an operational focus. Together, these dualities construct the how and the what of leading.”

While the ideal is to be optimally balanced in these dualities, these pairs tend to be negatively correlated. Strategic leadership is inversely related to operational leadership, just as “the more forceful leader, less enabling that individual is likely to be. Conversely, the more enabling a leader is, the less forceful he or she is likely to be.”

They write, “Gifted leaders . . . are often the last one to acknowledge their gifts, even though they have ample evidence and feedback that attest to [them].”

The authors state one of their primary missions is to help readers “to come to grips with your strengths and make full use of them without overdoing it.”

The authors emphasize using the 360 degree evaluation process whereby individuals are evaluated from multiple perspectives. Their system is built around their patented Leadership Versatility index, which subdivides each of the four primary strengths as follows:

The authors advocate these be balanced, through mastering the inner game of leadership yin and yang. Many leaders, however, are strong in one aspect yet unaware of the other, which they convey by suggesting imagining “a leader standing alone in a room, facing one way, and his back is completely turned to the other. He is blind to it. For all intents and purposes, it simply does not exist for him so he makes no attempt to consider it or change his position in the room to see it.”

They suggest this single focus leader “is the very definition of absolute lopsidedness.”

The authors define lopsided leadership, as reflecting “a bias toward one side of leadership and a prejudice against the other side.”

The concluding chapter profiles the leadership ideal, an executive “fluent both strategically and operationally and kept both perspectives and continual balance. He rarely talked strategy without considering the operational implications and when he raised tactical issues, it was always in a strategic context. He had a singular ability, possessed by very few . . . to be absolutely, forcefully direct, and at the same time non-threatening. He was able to confront people with such tact, that though they got the message loud and clear they didn’t so much feel confronted as considered, reassured, and improved.”

The key to achieving this mastery follows from recognizing the need and desire to change, addressing the means to change through prioritizing psychology over behavior per se, and employing counterweights which can “act as safety nets and reality checks for mercurially bold leaders who characteristically have trouble staying in bounds.” The need for change follows, the authors suggest, from a crisis confrontation, and/or process, such as their patented Leadership Versatility Assessment Tool.

They emphasize that change is realized through fundamental psychology. Solely emphasizing behavior is inadequate, since “subconscious, self-protective, competing commitments account for why so many well-intended efforts to change don’t pan out. They constitute the resistance to change that, unless dealt with directly, will defeat your attempt to improve.”

Psychology is necessary to employ mindset leverage to “address what is inside your head that threw off your form in the first place, the warped views and emotional forces that result in overdoing it and lopsidedness.”

The path to this ideal is achieved through acceptance, involving being “courageously objective about yourself, inside and out;” testing, for which their Leadership Versatility index is their favored tool; and offset, through specific means of achieving that balance. As the authors advise, “You must put counterbalancing people and processes in place and then allow them to influence you, even when it hurts, all the while being neither too resistant to those influences and nor too receptive to them.”

The authors conclude: You are how you lead. They convey their message in a short, accessible, easy read through presenting fundamental principles, supported by numerous stories and instructive quotations. Key points are illuminated by case studies drawn from technology: Apple’s innovation leadership; literature: Moby Dick, listening to your team; and professional tennis: Andre Agassi, accepting that perfection is unattainable.

Ultimately, Fear Your Strengths is all about balance. In this regard, consider this volume as the executive’s equivalent of the Goldilocks and the Three Bears: as the desired porridge in the nursery story emphasizes avoiding extremes—“not too hot, not too cold, but just right”—so, too, should the application of strengths be just right.