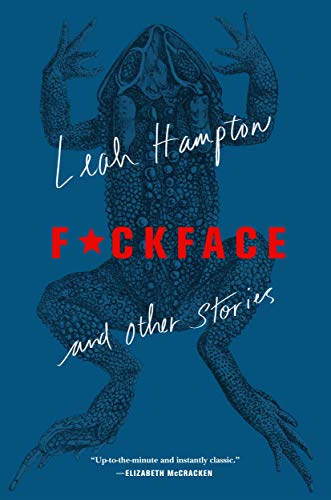 “Exquisite, poignant, engrossing . . . any of these terms could be applied to Leah Hampton’s remarkable collection, but none would capture the diverse and complex nature of her exceptional work.”

Starting with the title story, “F*ckface,” Hampton introduces us to characters born and raised in rural Appalachia in her debut collection of short stories.

The close ties between the people and their environment becomes apparent from the very first line. “Nothing’ll ever fix what’s broken in this town, but it would be nice if they’d at least get the dead bear out of the parking lot at Food Country.”

F*ckface, the name given the manager at the Food Country by his less than loving employees, determines the same thing.

As the narrator struggles with the loneliness of living in a small, isolated community and losing her closest friend to a bigger city, she also comes to realize there's more to F*ckface than meets the eye.

It’s the same experience that readers will have over and over throughout the collection. Hampton serves up characters we think we know, only to provide us with an unexpected turn into the depths of each one of them.

It’s a constant reminder not to make assumptions based on the geography of a person’s life.

Though many of the denizens of the community are poor and uneducated, Hampton’s characters also run a gamut from college professors to park rangers to members of the military.

Each story has its own beginning, middle, and end. Linked together by location, they range from stories of loneliness to love to leaving town to coming home and even to the deaths of thousands of bees.

The twin themes of environmental disaster and human suffering are interwoven throughout.

“Gutted mountainsides and holler fills loomed for me the whole way. Behind every ridge lay some smothered or poisoned creek, some thick scar of geological mastectomy. My chest slumped; the loss laid into me like it does everyone who knew the place before.”

We see the ancient lands, the mountains and hollers destroyed as if from a cancer. The scars from mining and greed gouged into the earth as a surgeon cutting into a body.

Even love, in this series of vignettes, comes with its own brand of suffering, such as in the final story of the collection, “Sparkle.”

“For all my sins, I love a hairless, lop-eyed chemist so bad it makes my whole body hurt when I so much as sit next to him. It hurts way inside, like cramps or sickness.”

Hampton’s way with words turns her stories into miniature literary masterpieces. With the darkness of the best Southern Gothic novels and the realism of Classic American Drama, Hampton shows us that this insular—and often overlooked—region is full of far more than just moonshiners and rednecks.

Most of the stories are written from the third person point-of-view, but the ever-creative Hampton shifts into the lesser-used second person for “Saint.”

The voice of this particular story shows off Hampton’s literary skills to even greater effect, which says a lot given the dexterity with which she has imagined her other tales.

Though religion plays an important role, it doesn’t dominate the landscape. Hampton slips religion in as naturally as any other description, as seen in “Devil.”

“They began their meal with a long prayer. The old man spoke of sin and unworthiness, noting his son’s presence only indirectly. Per his usual, he invoked brimstone upon enemies, implored the heavenly father to protect this land, and blessed briefly any sacrificed souls.”

There are good churchgoing folks, then there are men like the protagonist’s father in “Devil,” who Hampton describes as, “Six four, sharp white button-down even on a Saturday, and mean as fuck.”

Each story carries its own tone. From humorous to heartbreaking, Hampton brings every emotion in her writer’s toolbox to bear. She deftly shows readers what to expect with the opening to each story, preparing us for what’s to come.

“Wireless,” for example, opens with, “The Holiday Inn Express on Richland Skyway seemed like as good a place as any for Margaret Price to maybe, possibly, stick her finger up a guy’s butthole. At least somebody had asked her to. People didn’t ask Margaret for anything, let alone sex stuff.”

“The receiving line snaked through the chapel, its center aisle a corpus of grief, clutched purses, dark jackets. Miss Florence had insisted on cremation and a rented casket, had made her nieces promise only minimal fuss, because why spend good money on old bones?”

Whether describing people, places, or things, Hampton’s poetry brings everything into sharp focus. “His face was puffy as usual, his skin splotched red and brown from six decades of abandoned anger.” Her words show us the humanity of all who live in this oft-forgotten corner of America.

Exquisite, poignant, engrossing . . . any of these terms could be applied to Leah Hampton’s remarkable collection, but none would capture the diverse and complex nature of her exceptional work.

A literary journey no reader should miss.