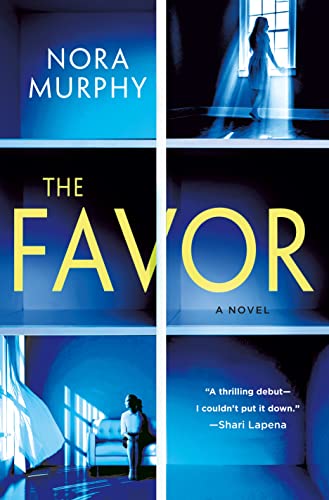 “It should be noted that Murphy constructed this story in the first person for the three major characters—a point of view that can be difficult to follow. But Murphy has clearly defined each character and makes it easy.”

Nora Murphy, in her new mystery The Favor, has taken the 1950 book Strangers on a Train by Patricia Highsmith and created a strong resemblance between the two. Subtle differences but the concept of two women killing each other’s husbands connect the premises.

Leah Dawson is a lawyer, newly married to a man she discovers she really does not know. As their marriage continues through several months, it is clear that Liam, her husband, has his own plans for the marriage. The more he controls her every movement, the more she drinks, and she begins to realize this is one of his forms of control.

Liam wants a lovely, stay-at-home, perfect wife, and he begins to model Leah into that. He gets her fired from her job, cuts her number of friends to zero, and restricts her movements to simple errands and trips around the neighborhood.

On one of her trips to the local liquor store, she sees McKenna Hawkins, a stranger but one to whom Lean is drawn for unknown reasons. Leah soon discovers that McKenna, a trained doctor, has her own marriage troubles. Her husband, Zackary, convinces her that she does not need to work, and she leaves her employment, much to her own displeasure.

Both women are married to strong, demanding husbands and the onset of mental (and eventually physical) abuse drives each woman deep into depression.

As Leah discovers where McKenna lives, she finds herself sitting in the woods behind McKenna’s house, watching Zack’s activities as he further destroys McKenna’s individuality. Leah determines she must help McKenna remove herself from the situation—the situation so similar to hers.

One night as she watches the torment grow into physical abuse, Leah shoots Zack. She approaches the house and makes herself known, only as a stranger, to McKenna, then disappears.

Enter Detective Jordan Harrison. His first thought is that McKenna is responsible for her husband’s death, but he has no evidence to prove it. The few forensic clues that appear can not be associated with McKenna, and she’s not talking about the strange woman who appeared after the shooting.

It does not take long for McKenna to accidentally encounter Leah, and the tale turns when McKenna follows Leah and learns about another abusive husband. In much the same way, McKenna discovers that Leah is experiencing much the same pain from Liam that she experienced with Zack. She returns the favor, and now two men are murdered in much the same way.

Detective Harrison, now assigned to this new case, senses similarities, but he can find no connection between the two women.

It should be noted that Murphy constructed this story in the first person for the three major characters—a point of view that can be difficult to follow. But Murphy has clearly defined each character and makes it easy.

The reader senses the anguish of both Leah and McKenna, and although they clearly are guilty of the crimes they committed, the reader’s fingers are crossed that regardless of how much investigation Harrison does, regardless of the fact that he puts the clues together and comes up with the obvious solution, the reader is cheering for these women to be free of the justice they so deserve. Or do they?

This book is hard to put down. Murphy has constructed the perfect crimes and sympathetic major characters, while at the same time providing Detective Harrison with all the clues he needs, but no connection.

A great debut novel, and we can hope there will be more to follow.