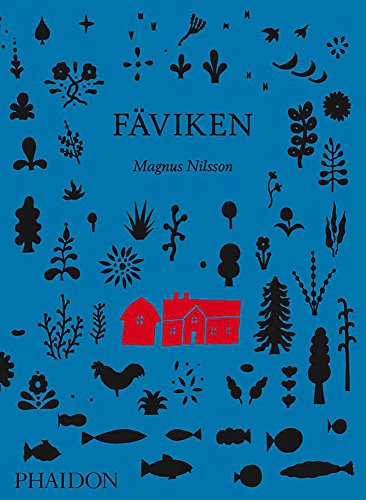 “If this book doesn’t put you in touch with your inner Viking, I don’t know what would. . . . If you buy only one cookbook this season, let it be Fäviken.”

With the rise to prominence of the highly acclaimed restaurant Noma in Copenhagen, Nordic cuisine is enjoying a renaissance.

But before you start to think that Fäviken is just another cookbook trying to capitalize on this trend, think again. To be sure, the recipes are distinctly and purely Nordic, but the book is as much about food culture and philosophy as it is about the recipes.

Far from the madding crowd of foodies frenetically booking and blogging their way through the restaurant scene in whichever local food hotspot they inhabit, there is a quiet, 14-cover restaurant called Fäviken Magasinet tucked away in a remote corner of Sweden that is making its mark in the food world.

The chef is an unpretentious 28-year-old Swede named Magnus Nilsson who was classically trained at L’Astrance, a three Michelin-starred restaurant in Paris. Back in his native Sweden, alone with his thoughts and his cooking as far from the cacophony of competing food ideas as one could imagine, Mr. Nilsson began to rediscover his Nordic roots and develop his own style of cooking that literally connects him to the land.

In the foreword to the book, the Swedish writer Mattias Kroon describes Mr. Nilsson as “a hunting, fishing and foraging chef trained in Paris.” His food is so site specific, that to try and recreate it anywhere other than the remote region of Sweden called Jämtland, is to invite failure. But before you give up, consider this less of a cookbook and more of a treatise on ingredients.

For Mr. Nilsson, the ingredients drive the cooking, not the other way around. His reverence for his particular terroir (as the French refer to it) is at the core of his cooking philosophy.

In a culinary world gone mad with globalization, Fäviken celebrates indigenous ingredients and is a call to all of us to slow down and appreciate what is around us instead of what can be ordered from around the globe via the Internet.

In a way, this isn’t an entirely new concept. In America chefs like Alice Waters and Dan Barber have been insisting on locally and sustainably raised ingredients for years.

What makes Mr. Nilsson different is that he is has an intimate relationship with every ingredient he uses. It is Mr. Nilsson who gathers the mushrooms, drives several hours for fresh fish, grows his own vegetables, butchers his own meat and hunts the deer before assembling anything on the plate. He is that rare chef who subordinates his ego to the ingredients making his cooking seem almost spiritual.

What he does with those ingredients can only be described as primitive minimalism allowing the ingredients to speak for themselves with only a bare minimum of human interference.

Here’s a sampling of what you will find: in his recipe for Scallops Cooked Over Burning Juniper Branches he calls for “fresh juniper branches for the fire, some dry hay with a high herb content, or a piece of moss that covers the plate to serve, 6 perfectly fresh, very large and absolutely sand-free live scallops in their shells and good bread and butter, to serve.”

Or how about Hazelhen with fresh lingonberries. Nilsson describes it thusly:

“The little birds are cooked whole [directly over a wood fire] and at the end, while someone else is carving them, I simply cook the hearts and livers, the lingonberries and a few of their leaves, letting everything fry for a few seconds before finishing it with some good butter and then transferring it directly from the pan to the plate.”

(If this book doesn’t put you in touch with your inner Viking, I don’t know what would.)

As much as the recipes, the writing in Fäviken is profoundly evocative. The book is divided into chapters on meat, fish, plants (not limited to cultivated vegetables) and dairy with a lengthy essay introducing each chapter that gets to the heart of Mr. Nilsson’s food philosophy. This is where you will be rewarded with insights like this one from his chapter on meat:

“Why cook a bird whole over direct heat? Why not just cut the legs off the body and leave the meat on the breast bone, brown them both and then cook them for different time amounts in a low temperature oven or maybe even a water bath, and then reheat to order? The answer is simple: because it will never be as scandalously delicious as when roasted for hours over direct heat by someone who has mastered the process, carefully caressing the meat with a soft brush, covering it with thin layers of good butter lightly seasoned with herbs and garlic, and the smoke from the fire giving the skin just a hint of burning wood. I think you can feel the love that the person preparing the food has put into it when you eat it. And love does not thrive in a hot-water bath (unless it is human-sized and has bubbles in it).”

Fäviken is a book for book lovers as well as cookbook connoisseurs. It is a beautifully crafted book printed on thick, off-white or gray paper and contains gorgeous full-page photos that are gently washed giving it the feel of stepping into the soft light of a late Swedish summer when the nights begin to draw in. (Sadly though, as well crafted as the book is, the copyediting is not up to the standards of the rest of the book.)

If you buy only one cookbook this season, let it be Fäviken. It is one of the most engaging and compelling cookbooks to come along in years. Magnus Nilsson’s enlightened cooking philosophy is transformational and should be read by everyone who cares about honest, simple cooking.

You may never make a single recipe from this book, but it will undoubtedly make you a more conscious cook.