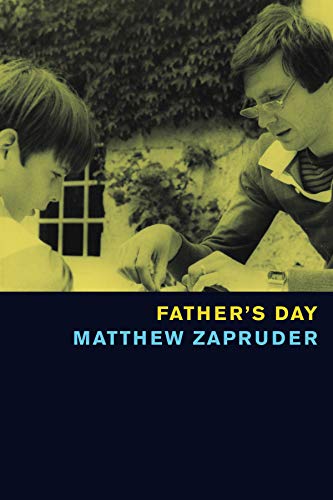 “It is somewhere in the fearful and joyful fragility of love where Matthew Zapruder’s readers are brought ‘to that place beyond words.’”

Last year Matthew Zapruder published a critical book entitled Why Poetry. In his introduction to that book, he writes that he wants to answer the question why anyone would choose to read poetry. He gives his answer right at the beginning: “The experience of getting close to the unsayable and feeling it, and how we are brought to that place beyond words by words themselves, is the subject of this book.” He goes on for a couple of hundred pages and does a good job.

But he does an even better one in Father’s Day, a new collection of poems. Here he doesn’t have to explain; he can simply show us how good poems, often exceptionally good poems, do the work they are meant to do.

In a prose Afterword he tells us that this collection was written between the years of 2015 and 2018, the time when the nation was convulsed by the presidential election. It was also the period when Zapruder’s son was first diagnosed (a word he doesn’t like “to the extent it carries within it the buried presumption of illness”) with autism. The book is shaped by these two events, one political and cultural, the other deeply personal, remaking the life of Zapruder’s family.

He writes bitter, scathing poems entitled “Paul Ryan” and “Roseanne Barr” (“is there anyone worse/than Roseanne Barr?”). There is “4th of July,” a poem of deep despair about his country (“even the red white and blue star/knows there is no future in the hollow land/without reparation to those who were here/and those we brought . . .”).

But then there are those things he is constantly learning from his son. Again, in the Afterword, he writes, “To my shame, as well as my ongoing gratitude, my son’s differences from expected norms initially threatened, then thankfully shattered, those anachronistic notions [Zapruder had about typical pathways through life], in favor of the start of a much more loving and accepting attitude.” At the very end of the book, father and son play together in a dark tunnel in a park, and the father/poet learns “there is/mystery even/in the new world.”

Zapruder’s language is simple and accessible, his lines short and fast, carrying the reader quickly through the poems. His syntax can get complicated at times, almost as if the poet wanted to slow the poem down to make the reader pay closer attention. The two impulses of this book, the political and the familial, come together near the end of Father’s Day: “. . . I come back/each time to remember/this is not a story/and all things I love/are real and can/I don’t want to write it/be destroyed.” It is somewhere in the fearful and joyful fragility of love where Matthew Zapruder’s readers are brought “to that place beyond words.”