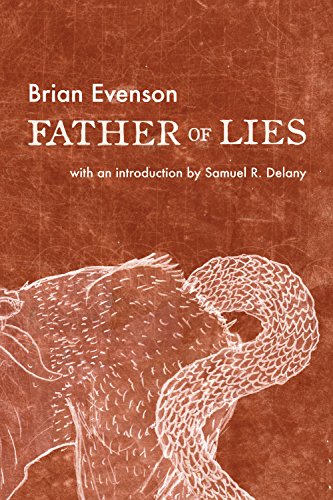 “especially relevant in this present age of religious violence and moral bankruptcy.”

Eldon Fochs is a Provost in the Corporation of the Blood of the Lamb, also known as “Bloodites.” The fictional Bloodite religion bears outward features to the Church of Jesus Christ of Latter Day Saints, with recommendation cards for entry into temple ceremonies and a hierarchy of leadership.

Fochs visits Alexander Feshtig, a devout Bloodite psychiatrist, in order to curtail his disturbing thoughts and bad dreams. This visit sets off a chain of events that lay bare unspeakable evils in Father of Lies by Brian Evenson's.

Originally written in 1998, Father of Lies was reprinted by Coffee House Press along with reissuing three other interrelated works that explore religious violence. (The other works are A Collapse of Horses, Last Days, and Open Curtain.) The short novel begins with Feshtig's correspondence to church superiors and a lengthy analysis of Provost Foch's mental instability. The remainder of the novel switches between a more traditional narrative, in this case, a first-person account by Provost Fochs, and the diary of Alexander Feshtig. Despite an appearance of formal experimentalism, the novel is a taut page-turner.

The crux of the story involves the behavior of Provost Fochs with an emotionally traumatized girl in his congregation. Fochs discovers her walking past his house in the middle of the night. He decided to follow her and in a nearby forest he eventually confronts her. She confesses to having sex with her brother. In the ensuing melee, he murders her and may have sexually assaulted her.

Prior to the murder, Fochs witnesses a man in white order him to kill her. The mysterious man says, “Christ's blood will not wash her clean. She must atone for her sins with her own blood. Killing her is the best thing for her. Kill her to save her.” [Italics in original.] The parallels to the Mormon concept of blood atonement (what motivated the murder of children in the Mountain Meadows Massacre) is chilling.

Evenson's literary genius lay in his ability to spread reasonable doubt and blur lines of inquiry. As tensions rise, two Bloodite women accuse Fochs of raping their underage sons. Fochs gets assistance from the church leadership, diligently working to intimidate and later excommunicate the women who brought the charges against him. But Feshtig is on his tail and works hard to accumulate evidence against Fochs, even if it means losing his job.

Evenson creates a believable atmosphere of paranoia and authoritarianism. He shows how evil is enacted upon the weak. Fochs has a special skill for manipulating the confidences of underage children. But a greater indictment remains. How can an allegedly moral institution like a church can turn into a corrupt cesspool of hidebound careerists and spiritually bankrupt thugs? Throughout the deliberations, the leadership keeps emphasizing their desire to maintain the church's reputation and how loyalty to them is above all other morality. The inner operations of the Bloodites have disturbing similarities to political dictatorships and organized crime.

Evenson complicates matters by having Provost Fochs witness the activities of a man called Bloody-Head who may or may not exist. Is Fochs insane? Does that let him off the hook for his despicable crimes?

Even after the book reaches its conclusion, the matter isn't resolved with any clarity. In this case, Father of Lies is similar to Crying of Lot 49, where things get more mysterious, not less, as the story proceeds. Evenson’s portrait of individual evil and the willing collaborators who whitewash their crimes make this work especially relevant in this present age of religious violence and moral bankruptcy.