Fates and Traitors: A Novel of John Wilkes Booth 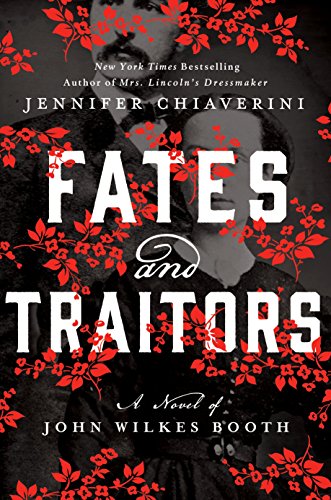 “For collectors, this book is a keeper.”

Carefully researched, with dialogue and social manners true to the times, and a setting that evokes the Washington of the 1860s, Fates and Traitors by Jennifer Chiaverini is the equivalent to comfort food for fans of historical fiction. It is filling, satisfying, and so very good.

Of all the villains in American history, John Wilkes Booth is not only the most infamous, but is perhaps the one individual whose actions most changed the course of our history.

Had Booth not assassinated Abraham Lincoln, Reconstruction might not have been so vengeful; the Ku Klux Klan may never existed; Jim Crow laws may never have been enacted; and America’s racial divide may have closed, if not seamlessly, at least not as bitterly as has been the case.

None of the what-Ifs are more than speculations, but the United States and the Confederacy deserved the chance to heal their differences under the leadership of a benevolent president.

A single bullet ended the hopes of millions that the war that killed or maimed hundreds of thousands of men on both sides of the conflict would end, in Lincoln’s words in the Gettysburg Address, “. . . a more perfect Union.”

Not that Chiaverini writes a diatribe about what have been or indulges in handwringing. Like the gifted historical novelist that she is, she presents the facts, illustrates the horror of the event through the eyes of four women who were dominant figures in Booth’s life. Tragedy becomes personal.

The novel begins with Booth’s death as a prologue, a scene most readers would expect at the end of the story. During the hours before he draws his final breath, Booth reflects on the women in his life, first of all his mother.

“John took a shuddering breath through the thick fluid collecting in his throat. “Tell my mother . . . I die for my country.’”

It is not a sentiment the watching soldiers care to hear.

As he dies, Booth assures himself that there will be no consequences for his family. “H would have abandoned his mission rather than bring suspicion down upon any member of his family, or upon any lady—even one such as Mrs. Surratt, who had lent her tacit support to the plot by harboring many of the conspirators in her boardinghouse, by giving them an inconspicuous place to meet.”

Booth is certain no one would blame a respectable widow such as Mrs. Surratt. Nor would anyone persecute his loving mother, nor his sister, Asia, to whom he left a missive explaining his motives and exonerating her of any involvement.

As for Lucy Hale, daughter of Senator Hale, and the woman to whom he is secretly engaged: “She would mourn him, but in silence, lest his notoriety ruin her . . . in time her heart would heal . . .”

Perhaps Booth truly believes that his act of murder will affect no one but himself. Perhaps he believes that the assassination of Lincoln will save the South—and the rest of America—from a tyrant. More likely he sees himself as the hero of a play of his own devising with little regard for others.

He is glad his mother cannot see how he suffers rather worrying how his act might break her heart. He worries that his sister, Asia, might burn his missive and his words be lost, rather than fearing leaving his papers with her might cause suspicious.

His dismissal of Lucy Hale’s grief as something she could quickly recover from seems callous, while his disregard of what dangers Mrs. Surratt will face because of her involvement demonstrates his lack of empathy for either woman.

The narratives of Mary Ann Booth, Asia Booth Clarke, Mrs. Surratt, and Lucy Hale entwine with those short and infrequent scenes in which Booth provides the point of view. For the most part Booth is seen through the eyes of the four women.

To his mother, Mary Ann Booth, he is the perfect son, her favorite although she tries never to show her preference. She ignores his escapades and fails to realize that his tattling of his brother Edwin for borrowing his father’s costumes is a deliberate act he knows will earn his brother a beating.

John Wilkes Booth had no difficulty anticipating consequences in that episode.

Asia Booth is the only one of the four women who recognizes that John is not a pure and innocent individual that their mother believes he is. “The brother she adored was a spy, a smuggler, a rebel, and each terrible word meant death. She knew with chilling horror that if her brother had twenty lives, he would sacrifice each one for the Southern cause.”

In the Booth household where every family member supported the Union, John Wilkes is an anomaly.

But no one believes he could be a murderer.

Lucy Hale, even though she is in love with Booth, is shocked by his diatribe about Lincoln, but reassures herself that he is just overwrought because he considers himself a patriot of Virginia.

The most harrowing narrative is that of Mary Surratt as she recounts the conspiracy that she believes is a plan to kidnap Lincoln. After the assassination, she, her daughter, and one of her boarders are arrested. Her civil liberties are ignored in the public’s desire for revenge for Lincoln’s assassination.

Asia’s husband and her older brother, Junius, are arrested, and Asia avoids it only because she is pregnant. Booth’s mother and older sister are hounded. As for Mary Surratt, she pays the heaviest price for knowing Booth.

Fates and Traitors is a magnificent novel that presents an accurate portrayal of the individuals involved in Lincoln’s assassination. Chiaverini’s storyline follows current research, although there are some historians who assert Mrs. Surratt was equally as guilty as the other co-conspirers.

For collectors, this book is a keeper.