Fate, Time, and Language: An Essay on Free Will 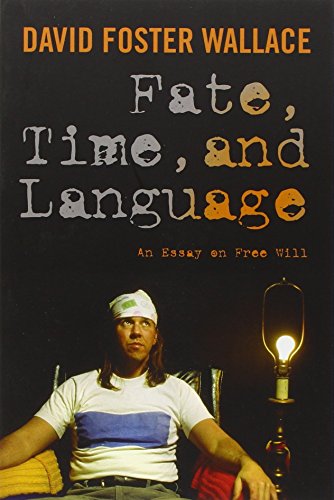 Fate, Time, and Language is a collection of monographs whose subject is a study of the validity of fatalism from the perspective of the use of logic practiced by philosophers.

The intent of the collection is to provide context for David Foster Wallace’s senior honors thesis, originally written in 1985 for Amherst College’s Department of Philosophy. This collection has value for those wanting to know more about philosophical underpinnings of this well acclaimed but sadly short-lived novelist.

The collection also provides us with three valuable introductions: one by James Ryerson; one by Steven M. Cahn, who provides the introduction to Taylor’s material; and one by editor Maureen Eckert, who wrote the introduction to the more contemporary material by David Foster Wallace. DFW’s thesis topic of some 80 pages is a revisiting of the debate which started in 1962 with philosopher Richard Taylor’s essay on fatalism, an essay that is reprinted in the collection along with rebuttals from several philosophers of that time, and Taylor’s responses to those rebuttals.

The philosophy of fatalism is that human actions and decisions in the now have no influence on the future. The fatalist claims that it is the reverse: that the future constrains what happens now, displacing cause and effect; the effect must have (rippling backwards through time) caused the cause. In philosophical terms, sufficiency is necessity. Fatalism as a belief system is dead-ended like solipsism, the belief that nothing exists outside your own head.

Both are extreme and counterintuitive but difficult to disprove within the confines of the tools of academic philosophy. That is, fatalism and solipsism may be defendable philosophically, but don’t really work out well for their practitioners. And the gap between philosophy and the real world appears difficult to reason about. Note that Taylor claims that he does not actually believe in fatalism, only that he has discovered a sequence of logical statements (by logic I mean mathematical logic expressed in language), where each statement may be taken true by itself, but when chained together will imply the logical conclusion that fatalism is true (again, as expressed within the rules of logic).

Although Taylor claims to use logic in his essay, a diligent reader without academic philosophical training may view that logic as expressed as something extremely contorted—with Latin phrases randomly thrown in—and be hard pressed to determine exactly what was being claimed. If there is logic in Taylor’s essay, it is obfuscated logic. The reader becomes dependent on the clear, well written introductions that bring out Taylor’s intention and DFW’s response. Presented after Taylor’s essay, but before DFW’s thesis, are counter-arguments by eight additional philosophers, using obfuscated logic of their own.

If one were to take the philosophers arguments seriously, the point would be to note that cause and effect has better expression through the mathematical concepts of correlation, probability and statistics, than through logic, and that the philosophers having only the hammer of logic treat objects (that do not resolve logically to logic) as nails to be hammered again and again. That is, one might claim that they are no better than fanatical religious metaphysicians who in past times argued over the number of angels that can dance on the head of a pin.

The philosophers also focus on language as the principal tool of logic rather than on the relationship of language to the world except in severely stilted analogies. The limit of language becomes the limit of their world. The consequence is that the arguments emphasize refining the precision (of definitions of words) when the more proper issue should be one of accuracy of concept, i.e. one of using the wrong tools for the job where statistics, probability, and correlation would be more proper. Apparently philosophers have been shortchanged in their education in the area of mathematics. (Though it should be noted here that DFW’s thesis contains a wealth of diagrams, formulae, and footnotes.) But there is another possibility.

To the post-modern reader interested in hermeneutics it appears that academic philosophers may simply be arguing for the enjoyment of it. The use of mathematical logic in this instance becomes not science but scientism, the pretense of science and used for social control.

There is a wonderful story by a Russian master that I am certainly going to get wrong in various small instances but hope keep true to the essentials; it is about a small rural town in the far depths of mother Russia where the village elders would gather each day to discuss pressing issues in the larger world, things they knew nothing about but enjoyed talking about, including a certain famous building in St. Petersburg, the question as to whether its entrance had four columns or five. Some would argue four. Others would argue five. As an argument, this went on and on, day after day, mainly because none of the arguers had ever been to St. Petersburg, and photographs were unheard of—that’s how isolated they were. Well, one day, one of the elders had some business reasons to take the long journey, a several months ride, to visit St. Petersburg and settle the argument once and for all. He takes his journey, and sees the building but when he gets back, he tells his colleagues that he was way too busy with important work to get out to see the building of dispute. He says this because the social connectedness of the process of the argument is more important than right and wrong. This story may be true also for academic philosophers.

A reader familiar with DFW’s novels and short stories may see the philosophical process as unintentional humor ripe for exploitation. But the young DFW has been captured by the system (though not totally, as we shall see). He goes to extreme logical contortions in his own thesis to disprove fatalism using variations of the same logic as his educators plus a wealth of diagrams and formulae, and does it so well that he wins the school’s philosophy thesis award! From the perspective of today, DFW’s thesis could easily fit as an absurdity into one of his novels.

One might posit that DFW over time recognized the absurdity, and this recognition was a major factor in switching careers from philosopher to novelist. One sees the future DFW winking at us from his nascent self in his thesis with a reference to terrorists with nuclear weapons on the Amherst campus, and in an aside used as an annotation to a diagram, “(though the number of possible daughters of a given world-at-[a]-time could very well be infinite, I will for ease of presentation pretend that there are only a few).” And it should be to no surprise that nascent novelist DFW’s thesis has a wealth of diagrams, formulae, and footnotes to which the editor provides her own homage (a la Infinite Jest) by adding her own footnotes to DFW’s footnotes.

The same year DFW completed his thesis for the Philosophy Department, he also completed for the English Department, The Broom of the System, a book of some 500 pages, which became his first novel.

A novel of philosophical bent can be an enjoyable read even if the philosophy underlying it, when expressed in an academic setting might not be. In his novels and short stories, DFW does bring deeply philosophical ideas into the world without using the stilted terms, or intellectual rigor of academic philosophy.

If the only value of his schooling was to turn DFW away from academic philosophy toward philosophical novels, then the world has been made the better for it.

* A syllogism is a tool of logic.**
** This syllogism, however, is faulty.