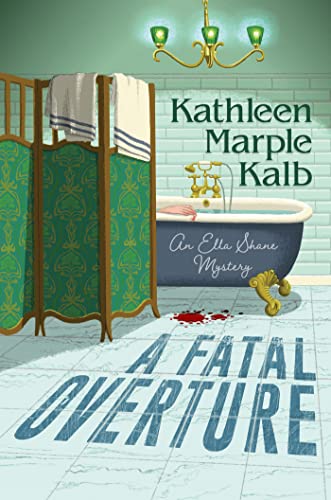 “With a gentle hand, Ella Shane draws back the curtain revealing that crime does exist in her world, while at the same time showing that goodness and mercy also abide.”

Ella Shane has finally accepted the marriage proposal of Gilbert Saint Aubyn, Duke of Leith. There are still a few wrinkles to iron out, however.

“We had yet to resolve how we would manage family life around an ocean, a singing career, a duchy, and heaven only knew what else. And I saw no reason for haste in upending my very happy and comfortable existence until we had a good answer.”

Not only Gil, but also his mother, the Dowager Duchess, and his aunts, have crossed the pond, presumably to give him moral support, but secretly, to aid and abet Ella in her attempts to remain as independent as possible.

When the ladies discover a dead man in their hotel bathtub, all plans go decidedly off course. No one believes either the Dowager Duchess or her sisters guilty of the crime; in fact, it’s the general consensus the dead man, son of the hotel’s owner, deserved what he got, as a womanizer who was notorious for taking advantage of the women employed by the hotel.

When Hetty McNaughten, Ella’s newspaper reporter friend confesses to the crime, everyone is totally skeptical.

‘It’s a manslaughter charge. Apparently, she confessed to stabbing Eyckhouse because he tried to assault her.’

As a group, Ella and the others think Hetty is taking the blame to cover for the real killer, a woman at the hotel who no doubt ran afoul of Eyckhouse.

“‘What a noble—and foolish, and incredibly dangerous thing to do, to take responsibility for it. And how completely in character for Hetty.’”

Gil has other concerns.

“‘My mother and her sisters.’
‘All they did was find the body.’
‘As far as we know.’ He sighed. ‘I have spent my life dealing with those ladies and I am quite certain they are not being entirely truthful.’”

What could those noble gentlewomen know and why would they keep quiet about it?

In the carefully guarded society of the turn of the century, surrounded by her protective cousin Tommy, Gil’s mother and aunts, and various friends and neighbors, Gillbert and Ella carry on their courtship. It is sensual and excruciatingly restrained at the same time.

The crime, as well in their relationship, points out the inequality of the status of women in the early 20th century, holding it up for scrutiny as Ella describes Gil as “modern enough to accept the idea of a wife who sings, but not enough to want her to vote.”

Though there is definitely death and mysterious circumstances in each novel of the Ella Shane mysteries, the stories seem more a panorama of New York at the turn of the century than an actual thriller.

In between fighting a losing battle with the new cook who has her own ideas how visiting nobility should be fed, worrying over the wording of the marriage contract, and discovering a new love interest for Hetty, Ella and His Lordship will manage to leisurely solve the crime.

This is best pointed out by the fact that mention of the murder occurs on the last page of the first chapter, while the following one gives the circumstances, it also serves to whisk Ella’s future in-laws from the hotel and into her own home as her guests. From there, it’s a whirlwind of visits about the city, singing rehearsals, nostalgia about Ella’s childhood after her mother died, and reminiscences of the other murders Gil and Ella have been involved in.

After this stroll down Memory Lane and several social engagements, the murder is brought up again at the end of Chapter 4.

“‘We still have to settle the contract.’

Thus, in this careless way, the death of young Eyckhouse is again brought to the reader’s attention, sandwiched among other aspects of Ella’s life.

While definitely light in the blood and gore department, these mysteries are nevertheless entertaining, and the coziest of the “cozy” variety. It’s refreshing to find such novels that don’t dwell lovingly on how many stab wounds the victim possessing while laying bare the “dark underbelly” of society.

With a gentle hand, Ella Shane draws back the curtain revealing that crime does exist in her world, while at the same time showing that goodness and mercy also abide.

All is left is for her to get that contract properly worded so she and Gilbert can marry, though one doubts it will be in quiet, wedded bliss.

No doubt some future murder is waiting for our heroine to cross the waters, and her readers will look forward to it.