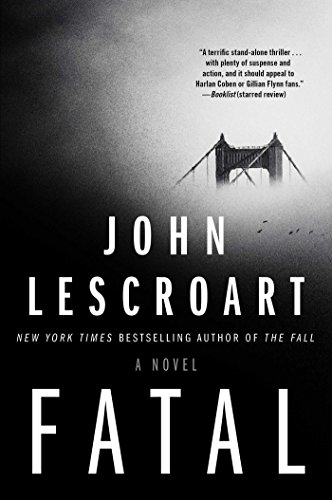 What would it take to destroy everything you appear to value in your life?

Before you answer, consider the unnerving way the trouble begins in John Lescroart’s Fatal: at a dinner party attended by three affluent couples, where husbands and wives chat about pleasantly mundane things all night long. Nothing amiss aside from that one lingering look from one attractive woman to one attractive man who isn’t her husband, followed by one lingering touch when they find themselves alone in the kitchen . . .

Days later the woman calls the man at his office and asks for his help in a legal matter that can only be discussed over a bottle of wine in a hotel room. What follows is the best sex either one has ever had . . . and the trigger to a chilling roundabout of murder and betrayal that threatens to destroy three entire families.

This description of what happens in Fatal’s opening chapters is apt to appeal to domestic thriller fans who appreciate stories about “people who aren’t as they seem to be.” Yet the novel’s ascension to the top of the bestseller lists will probably be propelled by something else: the disturbing feeling that the bad people in the story are so very much the next door neighbors you enjoy spending time with every day.

With disturbing realism, Lescroart sketches the cast of characters with broad, familiar strokes. The men are attorneys who keep photos of their wives and kids on their desks. The women are attractive, likeable, and thoughtful in guiding their private-school children toward top colleges. They all live in beautiful San Francisco neighborhoods where violent crime is only something you read about online.

Until it isn’t. With the first murder—of a husband shot straight through the heart and tossed into the ocean—most readers will expect the killer to be one of the other five adults. Those who read a lot of mysteries will also suspect the sons of the deceased. That’s because the everyday children of these everyday parents also exhibit varying degrees of darkness. The dead man’s twins, for example, are all-American boys who have grown into self-entitled brats, and one of them has recently purchased an unregistered gun.

Layer by layer, the veneer of upper middle class normality fades as nearly every one of the characters is revealed to have had the motive and the opportunity to commit the murder. While many writers of successful novels of this type would be commended for their use of “misdirection,” the completely true-to-life behaviors of these characters dispel any sense that the reader is being manipulated.

Fortunately there is one character who is as solid as she appears: San Francisco PD Detective Beth Tully. She’s a single mother of a teenage daughter. She’s well regarded by her partner, Ike, and other law enforcement colleagues. And she’s got an appealingly sarcastic edge that fuels plenty of cop-humor during the course of the story.

All of these qualities factor into her ability to lead the investigation. Following the series of short chapters leading up to the murder, Fatal becomes an engaging procedural as Tully considers the implications of the tides that brought the body to shore, questions whether the victim had sex before he died, and searches for the teenage boy’s illegally purchased gun, which “goes missing” shortly after the murder.

Tully’s appeal as a protagonist won’t surprise those who have read Lescroart’s long-running series featuring San Francisco attorney Dismis Hardy, another well-grounded character who anchors stories featuring all kinds of killers, thieves, and schemers who do harm for psychologically-twisted reasons or monetary or political gain.

What readers will appreciate most, however, is Tully’s emotionally high-stakes connection to the investigation. She is, in fact, the best friend of the cheating wife who puts the morally downward spiral of several other characters in motion.

This connection turbo-charges the investigation’s final course as Beth and Ike head through a metaphorical maze of corridors that may or may not lead to a closing of the case.

The journey would be intriguing enough since each turn reinforces the potential guilt of every suspect, but it’s even more so thanks to the funhouse mirror effect as Tully looks into these peoples’ faces and is forced to wonder if they’re anything like what she sees.

All of which leads Tully toward a conclusion that is likewise completely true-to-life: justice is relative. It can be meted out with the rule of law when guilt is proven beyond a reasonable doubt. Or it can be hoped for in an afterlife where the wicked are punished and the deaths of innocents are avenged.