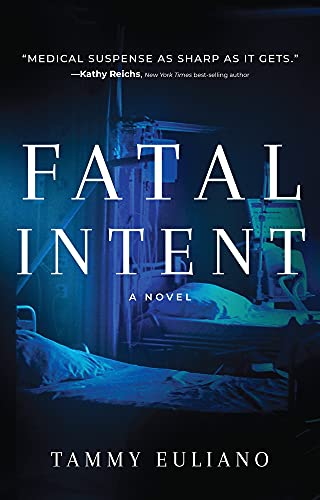 “A definite must read for those who enjoy medical thrillers.”

Florida anesthesiologist Dr. Kate Downey has a lot on her mind. Not only is she grieving over the accident her beloved husband Greg suffered, leaving him in a vegetative state, but she also mourns a little girl she lost through miscarriage. Greg's brother Adam is stressing her out further. Adam wants to pull the plug on Greg, but she disagrees wholeheartedly.

In addition to these stressors, she learns that several of the patients she administered anesthesia to for minor elective surgery are dying at home a few days later. This new revelation proves to be disturbing, and Kate needs to know what is causing these patients to pass within days of their surgery—many of them are elderly.

Dr. Charles Ricken, a surgeon Kate distrusts and dislikes, claims she is at fault and places responsibility for these untimely deaths on her. To save her career and good name, she must prove her innocence. But where does she begin and who can she trust?

Jennifer Mason, a gifted med student Kate mentors, is also concerned. Could she have caused these fatalities? Kate confides in Jen about her worries as well as in her great aunt Irm, a feisty and sharp-as-a-tack senior citizen who lives with Kate.

Dr. Ricken claims Jen botched the intubation of the first patient who died, yet Kate insists that although there was some some difficulty at first, everything went smoothly, and no way could anything she did cause a fatality.

When Kate attends the funeral of Dr. O'Donnell, one of her first deceased patients, she meets his lawyer son, Christian. She praises him for his lovely eulogy of his father, yet she is somewhat worried he may blame her for his father's demise. When he invites her to grab a bite to eat, he mentions his brother wants copies of the records from their dad's surgery. This raises red flags for Kate. Could they really consider his death her fault?

When other patients die shortly after surgery—and those who were ones in Kate's care—distrust of her runs rampant in the hospital, and she is temporarily suspended from duty. Kate knows something sinister is going on, and to save her good name and career, she decides to investigate.

Kate and Jennifer peruse all the surgical records of those who died, trying to find a common factor. Kate asks to attain some diagnostic testing on lab work done on a few victims only to learn said patients have been cremated, so samples cannot be attained. What next? Putting their heads together, Irm offers suppositions pointing to Brad Jernigan, a recently employed substitute Certified Registered Nurse Anesthetist (CRNA). He just happened to attend to all of those who perished. A search for him finds he has mysteriously left the job and the hospital.

Tension escalates when Kate hears from her friend Randi, whose attorney husband confides in her brother-in-law, that Adam impersonated Greg by selling their mother's home, which Greg received in trust, yet due to his current condition, the estate reverts to Kate. Adam, a reformed drug and alcohol addict, cannot be trusted, but Kate has other important matters on her mind.

When Randi discusses this, she tells Kate her husband is worried that Adam may be impersonating Greg in other ways. They are similar in appearance, and Adam is known to be devious. Kate asks,

"'Your mortgage, credit cards, bank accounts, he could do a lot of damage.'"

Kate is further apprehensive about Adam and his shenanigans, yet all she can deal with is being suspected of killing her patients, so she puts this situation on the back burner. Now her main and only concern is to find out the truth about those who perished under her care.

Christian befriends Kate and includes himself in the search for answers. When her home is vandalized, he comes to her rescue. It appears someone broke through the sliding glass door, and Kate’s dog Shadow sustains several cuts in his paws. She believes this is a random break-in. That is until a note attached to Shadow’s collar reading “Back off” is discovered. Could this be Brad? Though she refuses, Christian insists Kate and her aunt stay at his place, specifying mostly to keep Irm safe.

More tragedy strikes when Jen goes missing. This is right after she contacts Kate with a cryptic text message saying, "He's here!" Kate knows she’s been doing some sleuthing on her own, so could she have found this man who they’ve discovered is going under many aliases? How much worse can things get? Is Jen in danger?

Fatal Intent, a fast-faced read, is both terrifying and captivating, with many intriguing subplots. This debut novel written with accurate knowledge of the medical field is straightforward and easy to understand without the addition of too much medical jargon. What is hair-raising is the possibility that someone so deranged could perpetrate such transgressions though they allege these acts are executed with good intentions—even if they are devastating and illegal. A definite must read for those who enjoy medical thrillers.