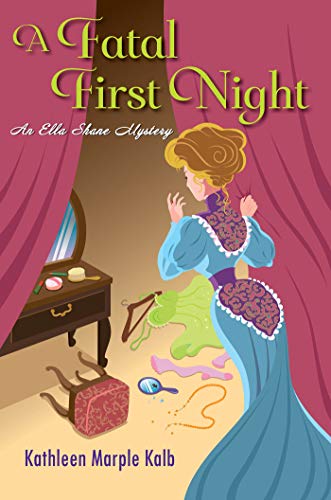 “a fascinating novel, filled with facts about life in the fin-de-siècle of the Victorian Era, of the niche of women during that time, social commentary on the attitude toward not only Blacks but Jews and the Irish, the strictures of courtship, and a murder or two thrown in for good measure.”

The curtain came down on the opening of Ella Shane’s new opera, The Princes in the Tower—about the disappearances of the nephews of Richard III—to thunderous applause, but the night itself ends on the stab of a knife.

Shortly after removing her makeup and preparing to leave for home with her cousin, former champion boxer Tommy, and a family friend, all are stopped by cries coming from the dressing room of the singer portraying King Richard.

“Tommy and I were first in the door, to see our Richard, Albert Reuter, with blood all over his shirt and a knife in his hand.

‘Oh, Miss Ella!’ He dropped the knife and collapsed, sobbing in my arms. ‘I didn’t want him dead.’”

Albert is arrested, of course. The police think it’s an open-and-shut case. The victim was Albert’s brother-in-law, married to his sister who had been murdered a year earlier. They decide Albert blamed him for her death.

Ella and other aren’t so certain.

Other matters soon draw their attention away from poor Albert, however.

There’s another murder case making headlines, the trial of Amelie Van Vleet, accused of stabbing her husband 14 times, and Ella’s friend Hetty McNaughton has been assigned to cover the trial, a coup for a female reporter.

“They found Mrs. Van Vleet in the drawing room, kneeling and sobbing in a pool of blood by her husband’s prone form. Suspicion immediately rested on her because she was the only family member in the house.”

Tommy is also mourning the loss of a friend killed during a sparring match at a local gym, and there have been poison pen letters directed at one of the new singers in the play, Cuban Rubin Avila.

Also, Ella’s would-be beau, Gilbert Saint Aubyn, Duke of Leith, suddenly appears, on other business, he explains, but always taking time out to look in on his favorite opera singer and the woman who has stolen his heart.

Gil has spoken forthrightly enough of courting Ella and has been continuing a long-distance correspondence since returning to England after their last murderous adventure together. He states plainly enough he hopes to move to a higher, though still honorable, level when she brings The Princes in the Tower to London.

In the meantime, he’s ready and willing to offer his help in Albert’s case, as well as showing an extreme interest in Amelie Van Vleet’s trial.

Though she cares tremendously for Gil, Ella is still hesitant to encourage him because she know how women lose practically all rights when they marry. She would like to become a wife and mother but she also doesn’t want to give up her career simply because she wears a wedding ring.

Father Michael, however, reminds her of one word. Bashert. A Hebrew word meaning fated.

“‘I think you and your duke are meant to be together. If you can find a way to stay on the same side of the ocean.’”

In the meantime, there are some mysteries to solve.

Though this story does have a murder in it, it seems to be more of a historical novel and social commentary with a cozy mystery tucked inside.  It gets off to a good start, having the killing occur within the first nine pages, but then the story meanders into other things,  discussions of baseball, the trial of Amelie Van Vleet, boxing, the rights of women, and a great deal of racial prejudice.

The accused isn’t mentioned again in detail until page 61, when Father Michael says, “Albert Reuter wants to see you.”

The visit occurs but then the story again goes back to rehearsals; funerals; Gil’s visits to Ella and their ever-so-proper courtship; and problems with Connor Coughlan, a Five Points gangster and childhood friend of Ella and Tommy.

When the murderer is finally discovered, it seems more a footnote to Gil’s discourse on Amelie Van Vleet’s crimes than the dénouement it should be.

Nevertheless, this is a fascinating novel, filled with facts about life in the fin-de-siècle of the Victorian Era, of the niche of women during that time, social commentary on the attitude toward not only Blacks but Jews and the Irish, the strictures of courtship, and a murder or two thrown in for good measure.

Undoubtedly Book 3 will follow, with Miss Ella and her duke meeting in London where that venerable town with be shaken by her stage performance on the stage as well as her sleuthing abilities.

Perhaps fate will then have its way.