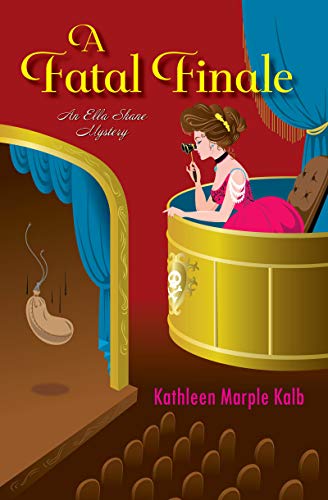 “a thoroughly enjoyable book, for both the plot centering around a still-contemporary malady, as well as its historical description of a world on the brink of a new century.”

Ella Shane is the owner of a touring opera company. She’s a diva but an untemperamentall one, and definitely not the stereotypical “stage actress” pursued by Stage Door Johnnies. In fact, she’s never been kissed. Her manager and cousin, Tommy, a former boxing champ, sees to that.

“I am a respectable maiden lady and an artist, not a chorus girl.”

Ella is married to her career as a singer of “trouser roles”—those once assigned to castrati—and everything is going fine until the singer playing Juliet to her Romeo actually dies onstage.

“She didn’t move during the last few minutes of the show but thanks to the heavy costumes we all wear, I did not realize she wasn’t breathing until the curtain was falling.”

It’s determined that Violette Saint Claire ingested nicotine instead of the water supposed to be in the vial Juliet drinks in the final act, but did she do it on purpose or accidentally?

No determination is made, and poor Violette’s body is shipped homeward to her relatives in England.

The Duke has come to determine if his cousin committed suicide or if she was killed.

Ella’s friend, Father Michael, feel differently. “If the coroner was kind enough to leave the door open for an accident, we should, too.”

The Duke is determined, however, so of course he and Ella immediately clash, being the two strong-minded people they are. In fact, minutes after meeting, he and the diva engage in a fencing match, of which the Duke comes out second-best.

‘My practice time is limited and we theater people have to stay sharp to earn our keep. I’ll talk to you while we spar.’

His stern face softened a bit.”

That only whets his appetite for more encounters with the lady, and as they pursue theories and clues—his cousin had an eating problem and was taking a home remedy containing nicotine to make her lose weight—and more than one encounter that appear as accidents but could possibly be attempts on their own lives, the two becomes very close indeed.

Who had reason to kill Lady Frances?

It’s possible Ella can solve the case and perhaps win herself a duke, but is she willing to give up the freedom of being her own woman and having a career to do it?

This is indeed a “cozy” novel, for though it’s ostensibly about solving a mystery, it proceeds so leisurely in that direction, the reader may forget there’s been a murder and view this as a romance with a crime incidentally involved.

There’s plenty of historical citing—a female reporter friend of Ella’s attempts to gain a foothold in the male sports world by writing about the Giants’ ball games; her cousin Tommy, once a boxing champ, still hangs out with his cronies from that era—and there’s plenty mention of the manners and customs of this turn of the century time where men and women, particularly those women who would now be considered celebrities, are concerned.

A Fatal Finale is classified as a “cozy” mystery, but it might also be called a “gentle” mystery, for there is hardly any violence, unless one counts as “violence” the fencing matches between Ella and the Duke or the climax of the book when she also challenges the villain.

If there’s any complaint to be found, it’s the way Ella decides who’s to be the villain of the piece. She homes in on the one male member of the troupe who had an unfortunate clash with the brother of a young woman he reputedly jilted.

However, it must be taken into account that at that particular period, much more importance was given to reputation and such actions than would happen today.

Considering how many activities Ella has—going to ball games, having costume fittings, riding her velocipede (that’s “bicycle” to the uninitiated), helping with patent medicine exposés, and rehearsing for various benefits, as well as being escorted by the Duke—it’s a wonder she has time to investigate!

This is a thoroughly enjoyable book, for both the plot centering around a still-contemporary malady, as well as its historical description of a world on the brink of a new century. It’s hoped future books in the series will have Ella solving more theater-based crimes with the Duke present and assisting.