Faster Than a Speeding Bullet: The Rise of the Graphic Novel 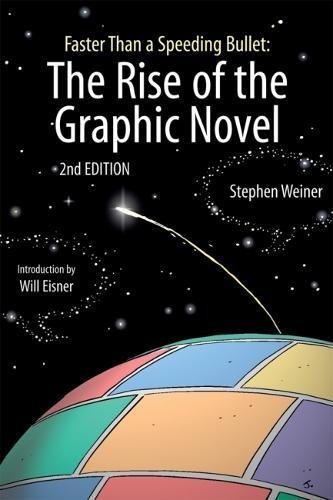 “Mr. Weiner connects all the dots in this amazing evolution of a true art form—an evolution driven as much by artists and writers as by their readers.”

Today comic books and comic book-based stories are everywhere. Especially in movies. The Avengers and Iron Man top the box office. Batman is action and adventure, a relatively serious social commentary on modern America and an insight into what makes up a single man.

The number one sitcom on television is “The Big Bang Theory,” a show easily incorporating comic book culture (or at least the popular conception of that subculture) as a central part of its character’s lives.

How did comic books change from being perceived as children’s entertainment to becoming the commercial and critical juggernauts they are today? The answers are just part of Faster Than a Speeding Bullet (Second Edition), writer and historian Stephen Weiner’s fascinating and insightful history of graphic novels.

This is a wonderful primer for both educators who need to familiarize themselves with the medium as well as those who have been reading comics faithfully for 50+ years. Like the best of historians, Mr. Weiner manages to logically connect seemingly disparate ideas and occurrences into one cohesive story, fitting a lot of important notes into one place, and he never belabors any of them. His timeline, (always important to a comic fan and reader!) is impeccable and brilliantly concise.

The early thirties lead to the introduction of comic books. These are essentially magazine versions of newspaper comic strips. They take off slowly, but when Superman shows up, all things change. The Man of Steel becomes a gold mine.

Publishers who had been creating cheap pulps or cheap magazines now race after their own gold mine. A good comic book could sell in the millions. It is rumored that at their peak in the early forties some titles such as Walt Disney Comics and Stories saw circulation figures as high as two to four million per issue.

But by the end of the Second World War comic books start to become maligned and misunderstood by almost everyone. The superheroes disappear and circulation plummets. Comic books were now being blamed for juvenile delinquency as well as corrupting the fragile minds of these youth. This leads to the famed 1954 Senate Hearings on juvenile delinquency.

As a result comics would voluntarily impose their own system of regulations and standards. This is where Mr. Weiner makes one of his strongest points in the history of graphic novels. The restrictions created by this Federal scrutiny forced comics to rethink themselves. DC (home of Superman and Batman) began creating new heroes based on characters that had been canceled a decade earlier. Flash and Green Lantern and others are reinvented for the Space Age.

Marvel looks at what DC is doing and under the guiding light of Stan Lee, slowly adds the charm, wit and artistry of Jack Kirby, Steve Ditko, and others into the mix. Marvel gives readers heroes with real problems and a bit of an attitude.

What DC and Marvel do is bring an entire new generation back to comics. From this a very serious fandom begins to evolve. At this point Mr. Weiner incorporates one of the most important books in the history of comics, Jules Feiffer’s The Great Comic Book Heroes.

Holding reprints of hard to find material from 20 years earlier, fans go crazy for what they see in Feiffer’s work. They especially love the work of Will Eisner on The Spirit. The book is an inspiration to fans and new artists everywhere. A new respect for the history of comics develops.

A very serious fandom creates the convention scene as collectors gather to sell back issues and meet artists and writers they admire. In the early seventies Will Eisner, creator of aforementioned Spirit, is one of the founding fathers of comics and a publisher himself. He meets with fans face to face. Inspired by their enthusiasm and love for the medium, Eisner becomes determined to expand the medium he helped invent. A visionary unlike any other, Eisner is moved to create what many consider the first graphic novel, A Contract with God and Other Tenement Stories.

Instead of heroics, a western, horror, or sci-fi, he is telling a story with serious literary merit while staying inside the now familiar format of comic books.

Not missing a note inside the history of the graphic novel Mr. Weiner weaves the rise of the individual comic store is to the story as well as the beginnings of independent publishers who take the risk of packaging both reprints and original material for a newly expanding fan base.

By the time the eighties arrive and bring The Dark Knight, Watchmen, and the Pulitzer Prize winning Maus, Mr. Weiner has made it very clear that books of this complexity and depth were able to arrive because of what had preceded them.

Profusely illustrated with art from Superman, Plastic Man, Tin-Tin, Zap Comics, Cerebus, Elfquest, and a host of others, Mr. Weiner connects all the dots in this amazing evolution of a true art form—an evolution driven as much by artists and writers as by their readers.