Fashion: A Timeline in Photographs: 1850 to Today 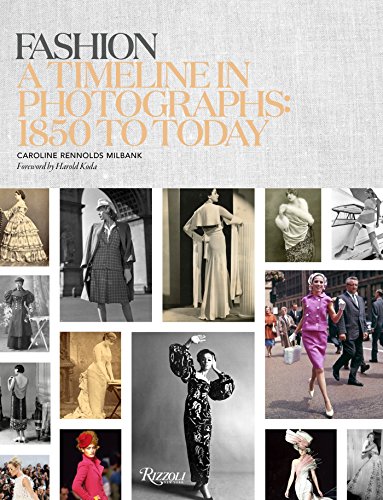 Caroline Rennolds Milbank has taken on the herculean and seemingly impossible task of chronicling fashion year by year via images that span over a century—all accompanied by very brief but enlightening text.

What this feat of perseverance accomplishes is that it provides amazing details of fashion that might have previously gone unnoticed for many readers. If you are expecting one of those coffee table books that is rife with designers, models, glossy photos, photographers, or personalities of note then move on. The focus here is fashion, and Milbank delightfully educates us with a vocabulary, literally, and imagery that is invaluable.

Without question this is a book to be read, pored over, and read again if you wish to really absorb all that is included. There is an almost unending amount of information here the likes of which this reviewer has never come upon. What was most interesting was not the more contemporary images but those that came at the onset of this timeline. The early images (1850–1900) are rather spectacular in terms of details and the morphing of silhouette changes that occurred in the pre-20th century era. Also of great note is that for the better part of 100 years most of the clothes featured were of the couture variety meaning they were sewn in the majority by seamstresses, ateliers, and home sewers rather than mass produced. The attention to details is nothing short of staggering and a precursor to what is currently known as haute couture.

Another source of great interest within this timeline is that clothes/fashion was all about what to wear and when whereas today there really are no rules or regulations by comparison.In days gone by, there were clothes for every imaginable activity and occasion from walking to biking, from visiting to mourning, from beach to evening and all of these tenets were rigidly adhered to by the wearer.

If there is anything negative to be said is that the reader will wish this was even more detailed by means of more images or possibly that the span of the timeline was not as vast so that more images could represent each year according to the trends, innovations, and customs of the day. In other words, this is a must for those who are obsessed with the progression of fashion as well as those who are in need of a text dedicated to how fashion has evolved since 1850.