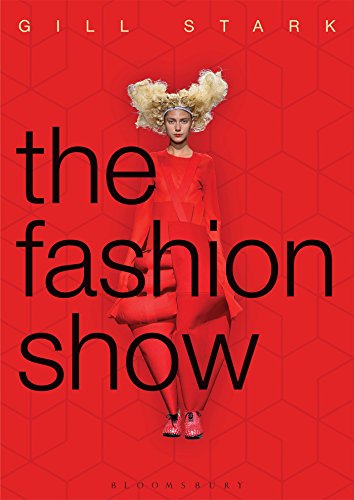 Gill Stark has proffered a rather fascinating read for almost any fashion reader. The more informed reader, of course, will consider a great deal of it as common knowledge, but if The Fashion Show is read by a less informed reader, the author has done a thoroughly superlative job of explaining and dissecting this whole “scenario.” What was most intriguing to this reader was the history section where not only personally hitherto unknown brands were mentioned but also facts about the entertainment value and origins that fashion shows provided well over 100 years ago.

“The fashion show by nature is a contradictory beast: its elitist live shows are inaccessible to most, but through digital technology, it has become part of our everyday experience; show production is about creative vision, but it is also about practical production; it feels like entertainment, yet its purpose is seriously commercial; shows are about presenting fashion, yet little of the production seen on the runway will be worn by the masses.”

What must be considered is that Ms. Stark is British and has been part of the British fashion system in many ways over the course of her long career. The interviews that are incorporated within are for the most part and most logically British fashion people who offer their personal insights about this business of fashion.

What is regrettable here is that the Americans get the short end of the stick when it comes to the innovations employed by designers in terms of venue when they presented their collections. Granted, this reader has spent decades in fashion and read countless books on the  subject but that just means my frame of reference is far broader than most. What the author does not speak to is the groundbreaking methods and innovations that never seem to get credited to American designers who have utilized their visionary concepts for over 40 years—whether it was the lobby of a bank, a disco above a bowling alley, a theater in the round, or the great stately Burden Mansion in New York City.

Aside from that, Stark really breaks it down in a most easy to read and sometimes over analyzed way; nonetheless, this is a book that has something to offer even the most jaded fashion reader. What cannot be accepted by this reader is the supposed sustainability and “message” factors of fashion that seem to be much more of a pipe dream than a reality since the topics have been bandied about almost as long as the “plus size” business formerly known as the half size business and must always be explained via press releases rather than implicitly.

The question remains would it be recommended reading for all fashion readers and most easily said the answer would be yes even if some of the information is too familiar for many. For the less seasoned or new generation of fashion reader this might be eye-opening in terms of what the whole concept of a fashion show encapsulates and how it all began.