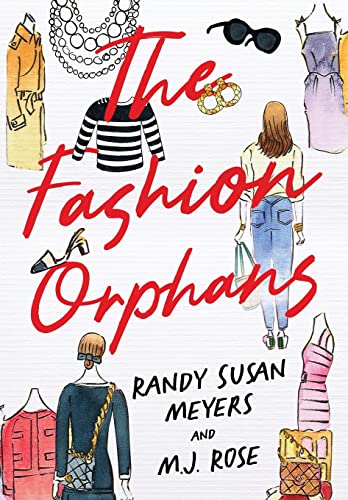 “The Fashion Orphans is highly recommended for readers who enjoy stories about family ties and the unexpected behavior of relatives and friends, with some wicked and humorous twists.”

Gabrielle Winslow, 55 years old and recently divorced, and Lulu Quattro, 48 years old and a widow and mother of two adult sons, are estranged half-sisters who have broken off communication for the past two years. When they receive a call from their mother, Bette's lawyer, about their inheritance both are excited about the windfall inheritance that will solve some of their personal problems.

Instead of a lump sum of money to wipe out debts and improve their lifestyle, Gabrielle and Lulu are crestfallen to receive the bad news: Their fashionista mother has bequeathed them an enormous and rarefied collection of Chanel couturier from handbags to dresses and coats. While Gabrielle has followed in her mother's footsteps with a penchant for impeccable sartorial sense, Lulu is a baker and more comfortable in aprons and Birkenstocks.

Both Gabrielle and Lulu remember Bette as an emotionally distant mother, but from the grave, their mother reaches out and communicates her love and devotion in a way she couldn't while she was living. Now she redeems herself through her secret messages that thrill both daughters.

Still, seemingly irreconcilable differences remain. Lulu wants to sell off their mother's vintage Chanel collection. Gabrielle is not sure they should disregard their mother's wishes. Moreover, their mother's attorney has the final determination on what happens to Bette's collection.

The Fashion Orphans is so much more than a humorous romp through the artistry of Chanel.  "For centuries, men created the rules. Wielded the pwoer. But no matter how oppressed and repressed women have been, we've used clothes and accessories to express ourselves." The couturier closet becomes a metaphor for the mother's communication of secrets, her relationship with both her daughters, and an opening to their mother's life beyond and separate from her daughters.

While the two sisters find their way back to each other through opening their own hearts to the secrets that lie within, they also are opening to their mother's entire persona, not just that as their mother . . . and as a different sort of mother to each of them. "Your mother," Imogene took a sip of wine, "was never an easy person. Showing emotion made her uncomfortable. That's not news to either of you, I know. The quotes, the cards—Bette wanted to leave them for you so she could stay with you a while longer after she was gone and make sure you understood how she felt."

This story will resonate with many readers, especially when it comes to the mother-daughter relationship, the loss of a parent, or the loss of a spouse through either divorce or death. There is also the subplot of Thea, an elderly bookshop owner, who has a conflict with her son and daughter-in-law over eldercare and desire for financial conservatorship.

The Fashion Orphans is highly recommended for readers who enjoy stories about family ties and the unexpected behavior of relatives and friends, with some wicked and humorous twists. This novel is definitely for you.