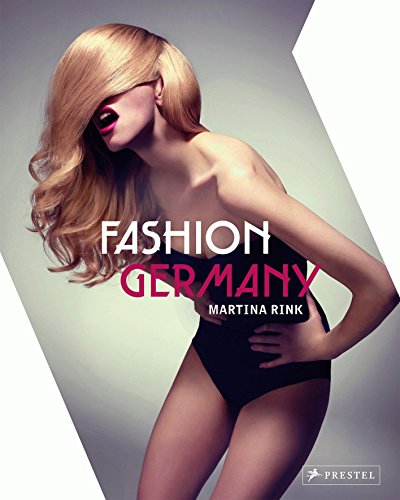 “. . .  provides a great overview of the creative community that exists in Germany. With the growing importance of the country as a leader in fashion, one might want to get to know these players sooner than later.”

In Fashion Germany, Martina Rink takes the term fashion and explores it in a much broader sense than just clothes from German designers. The expanded definition now includes creators from media, hair, makeup, PR, and journalism, as well as stylists, photographers, models, and creative directors—all the elements that comprise the fashion world. This broader view provides the reader with a new perspective since these key elements and contributors are often overlooked when speaking of fashion.

Inside Fashion Germany you find the usual suspects such as Tomas Maier and Lagerfeld, but mention of names such as Escada, Hugo Boss, and Bogner seem to be missing. These names certainly solidified Germany as a source of international fashion and were major players within the confines of fashion. One would have thought that even if they may not have cooperated with interviews, these players certainly should have been noted or discussed within the text. There are others that might have been included—albeit not as well known—such as Steilmann, too.

While the book is beautifully executed, the layout has a minor flaw: as a rule your eye goes to the upper corner of a page, which might have been the logical placement for the names or identifiers for each interview or profile. The result is that you seem to be searching for the name of the personality as well as their title, both of which appear on the lower left of the page.

Nonetheless, the book provides a great overview of the creative community that exists in Germany. With the growing importance of the country as a leader in fashion, one might want to get to know these players sooner than later.

Rink might have opted to cover a person or persons rather than such a broad approach to fashion. Her book based on the life of Isabella Blow was absolutely memorable and infinitely more enthralling. Fashion Germany might be construed as a bit more of a textbook or learning tool rather than a book destined for pure enjoyment—which is fine as long as you understand that before purchasing.