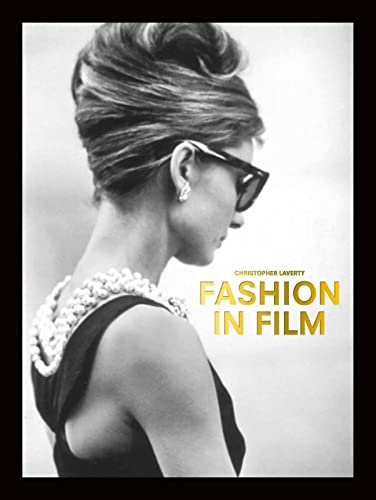 Any movie goer, magazine reader, or fashion aficionado knows that fashion plays an essential and integral part of the storyline in any film. Fashion in Film takes this concept a few steps further and much deeper than what one might expect.

Mr. Laverty imposes a rigid series of requirements, prerequisites, and conditions for inclusion on his list of designers in the book. He draws the line in the sand between wardrobe, wardrobers, costume designers, stylists, and most significantly to the clothes that are specifically designed for a specific movie. The playing field is considerably narrowed in terms of pieces but not in the roster of designers who have contributed specially designed clothes for a specific movie; for example, was Audrey Hepburn’s famous LBD specifically designed for Breakfast at Tiffany’s or was it pulled from a store or designer’s wardrobe? The same goes for Catherine Deneuve in Belle du Jour as to how much, if not all, of her wardrobe was designated as only for that film and how much was pulled from existing YSL pieces.

In essence, this reader felt that Mr. Laverty complicated a seemingly simple subject as well as offering information that most readers or filmgoers won’t really care about. Consequently, this enormously and meticulously researched and documented little book turns out to be a rather heavy read instead of fashion fluff you might have been expecting.

While the book is enlightening, Fashion in Film may leave you flat, as there is so much of what is written about is really extraneous to fashion in its purest sense.  While the list of designers and brands is nothing short of stellar, the reader might find that all this “data” concerning each designer, each piece, and each film will soon be forgotten. Does anyone care that André Courrèges designed a basic black bikini for Romy Schneider in La Piscine?