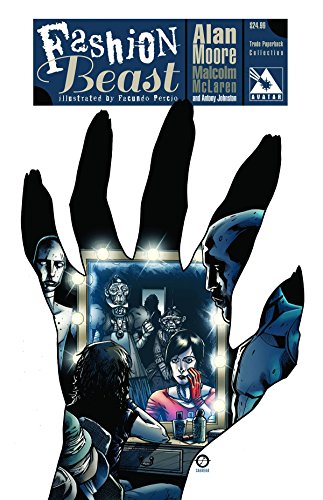 Originally written in 1985 as a screenplay, Fashion Beast by writer Alan Moore updates the classic fairy tale Beauty and the Beast as an eighties drama centered in the world of fashion—only this time the generally bucolic and rarified glory of a prince’s extravagant castle is complicated by nuclear winter, punk, radiation sickness, war and the ongoing decay of society.

This new adaptation of the beloved fairy tale accurately captures the detail and spirit of the original while refracting it all through a dystopian world inspired by the political and economic turmoil found in Great Brittan during the eighties—a period which famously saw the rise of punk as both music and fashion as well as the near destruction of the country’s social organization due to hardline leadership that turned a deaf ear to the needs of those it was supposed to lead.

It was Malcolm McLaren, famed entrepreneur, fashion boutique owner, and the man many hold responsible for the assembly of The Sex Pistols who first commissioned Mr. Moore to create a screenplay based on the tale. Ultimately the film fell apart.

Twenty plus years later the work was resurrected when the Publisher-in-Chief of Avatar Press William Christianson suggested that the script could be adapted to the graphic novel format.

The series was first published in a ten issue comic book format. While the books were solid, the pacing of the individual issues betrayed the story’s cinematic origin.

The brilliance of Mr. Moore’s initial vision comes to life. He is able to enlarge this deeply personal story of discovery and love with a much larger vision of a near broken world apparently run by out of touch mad people.

From the everpresent fear of a nuclear winter to the implementation of conscription to fight an unidentified war, the world he creates leaves the impression that much of what happens in our lives is completely out of our control.

Having just lost her job through no real fault of her own, Doll Seguin finds herself caught in a crowd of people moving en masse to audition as a fashion model.
In the world she lives in fashion and manufacturing dominates the city. The city comes to life when the factory turns on its light. The noise from the factory dominates the air as people get ready to go out for the night.

The town depends on the modern Beast, a fashion designer held captive by the memory of his mother, to create the best possible designs so that they can keep going one more day.

The glamour at the top is almost capsized by the slave conditions of the factories, the unfair exploitation of the workers and arrogance of those who rise to power. In other words, the glory, brightness and allure of fashion hides the truth of its inherent ugliness.

This duality of appearance vs. reality takes further form as gender of the lead characters can initially be seen as confusing. In the case of The Beast, his own beauty is disguised by the perception he has of his own ugliness.

Driving the narrative is the beautiful artwork of Facundo Perico. Given the punk roots of the story, it would have been easy to mimic the ever-evolving aesthetic of punk style.

Yet bringing the story to life by using a series of boldly torn images and disjointed angles would have dated the story immediately if not sooner. It would have also betrayed the story’s origin as part of general culture.

Anchoring the art inside a known world, a world of recognizable images and graphics opens the story up in a way that brings the reader into the fairy tale. This is a story for everyone, not just a few.

Throughout the story many panels remain silent, absent of narration. Often you are left with the unspoken feeling that you are in fact being lead by a camera. Angles shift slightly to reveal a change in intent. In one important passage Doll rides through town as young men are being assembled to go to war.

The men are stripped naked while their clothes are thrown into a fire. In the next panel the men ascend a ramp that leads into the back of a truck. It as if they are marching to the noble aspirations of the glory of war, as if they are going into their just reward: heaven itself.

The straightforward look of this panel is followed by a slight change in angle as Doll, seated in her expensive carriage, looks down on what is happening around her. The next image we see is the mirror opposite of that angle as the young men appear to descend into flames, the sheer hell of war and death itself waits to burn them.

While Mr. Moore writes detailed and clearly explained scripts, it takes a tremendous amount of skill and talent to match his vision. Mr. Percio brings everything from the image of a distorted mirror to the skyline of a dark city to life in a way that enhances every word written.

In an unusual move the story uses black borders at the edges as opposed to the white pages in regular comic books. This really causes colorist Hernan Cabrera’s work to explode from the page. We are drawn into the story much the same way that the darkness of a theatre creates a world separate from the one outside us.

Fashion Beast is a reimaging of the familiar equal to Jean Cocteau’s famed 1946 film La Bette et Belle. This is what Disney’s cartoon Beauty and the Beast would look like if the studio had anything to do with reality.