Fardwor, Russia!: A Fantastical Tale of Life Under Putin 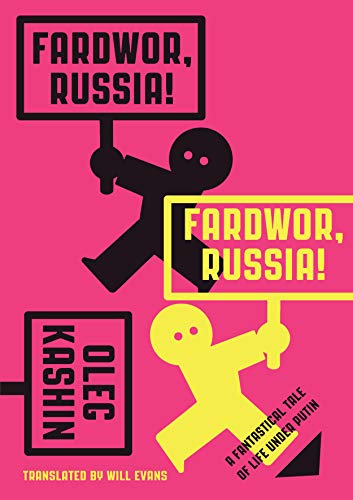 Oleg Kashin may be a recognizable name to readers who paid attention to international news. Kashin was a Russian journalist nearly beaten to death for his political reporting in November 2010, two months after submitting the manuscript for this novel. Now living in Switzerland, Kashin’s satirical novel Fardwor, Russia! has been translated into English.

A young scientist named Karpov has moved from Moscow to his inherited apartment in the Russian South where he conducts growth experiments on the local pigs, chickens, and goats with great success. He eventually graduates to humans when he finds a willing test subject in a circus midget. Having made the news, Vasya catches the eye of a spoiled, wealthy oligarch’s son named Mefody, himself also short of stature and desperate to gain height.

Fardwor, Russia! revolves around Karpov’s new growth serum and the government’s attempts to steal and use it. The government arrives in forms of Mefody’s older brother and various ministers of departments eager to capitalize on the serum, either to bring about a better Russia or ruin it with their unsavory ideas.

Karpov, wrapped up in his experimentations, fails to notice his wife’s reluctance to move or the signs of her unhappiness until it is too late and she has left him. He takes the government’s attempted interference with his projects in stride: When his shed is burned to the ground, he mentally shrugs; when thugs show up at his house and beat him, he complains that he understands words and violence is unneeded. Though Karpov is hardly a hero, readers will empathize with this man trying to do great deeds and accomplish great things with his life, even if his methods are a bit sketchy.

Perhaps part of the intended commentary in this twisted landscape of a desperate Russia trying to become competitors of the United States is the loss of individual voices. Some people disappear from the narrative, perhaps given cement shoes or having met with “unfortunate accidents,” yet the narrator simply moves on as if the person had never been discussed before.

And then there is the introduction of Close to Zero, a man brought to an asylum to teach children-cum-adults about the modern world: These men and women are children in adult bodies, the final result of Karpov’s experimentation. But it is unclear if these are a product of Karpov’s directly, the government’s forceful hand, or from the people who stole Karpov’s serum.

The tale is narrated mostly in third person though now and then there is authorial intrusion; it is unclear who the occasional “I” really is. Perhaps it is a journalist taking down Karpov’s tale, perhaps it is Kashin, or maybe it’s Karpov. Chapters vary between foci—Karpov, his wife Marina, Mefody the circus midget grown to average height, Nikolai (one of the various governmental goons), and others—but this shift flows with the narrative and the chapters transition smoothly.

Readers interested in contemporary Russia or satire need to read this book; those interested in a fun novel can enjoy this title of Soviet science fiction and its style. Max Seddon’s introduction to the novel is critical in helping readers situate the tale in real life and understand the literary construction as well as the political commentary underlying the fiction.