Far From the Tree: Parents, Children and the Search for Identity 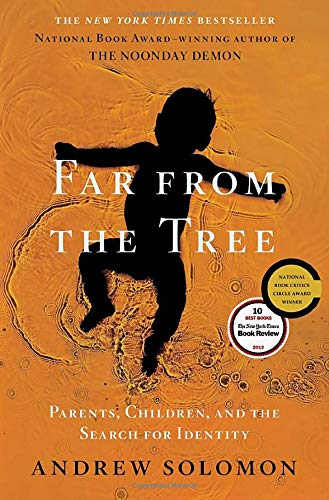 “It is noble and inspiring that so many families turn out strong and resilient in the face of adversity, but it is sad that they are so often left to fight their fights on their own . . .”

The apple never falls far from the tree is a well-known idiom for asserting the continuity of family characteristics and, therefore, family bonds. The presumed biological, cultural, and psychological affinity between parents and children provides the basis—or, for some, even the justification—for caring. Parents looking into the faces of their newborns assume the existence of a self that is like theirs. Armed with this recognition they are reinforced in their nurturing instinct.

Sure enough, reality and psychological development are more complicated than the above depiction. Often children will land far from the tree or develop further away from their origins. That is how horizontal identities will emerge or develop. In modern times, such identities are considered a measure or the degree equivalent of freedom.

Even so, their existence can be a source of pain. This is because horizontal identities often give rise to contention, as with homosexuality. But sometimes—and especially when horizontal identities are associated with physical or intellectual disability or psychopathology—grief is omnipresent because effort forms part of everyday life.

How to cope with children born deaf, as dwarfs, autistic, schizophrenic, mentally retarded, with multiple disabilities, transgender, conceived in rape, or who become criminals? Each of these conditions poses unique challenges. What they all share is how they are about lives unveiling outside the realm of what is valued as normal. Besides entailing serious organizational and financial challenges, such lives are rife with psychological stress as a result of stigmatization, on the one hand, and ambivalence, on the other hand.

This is the subject of Andrew Solomon’s book Far from the Tree, a 1,000-page strong volume about bringing up children who are not only different from their parents but different from almost everyone else, too.

The book is structured in 12 chapters, 10 of which are devoted to: deafness, growing up a dwarf, Down syndrome, autism, schizophrenia, disability, prodigies, rape, crime, and transgender.

In each of these chapters, Mr. Solomon presents the perspectives of both children and parents as well as those of the related scientific and disability communities. These perspectives are not always congruent—there is no single “right” way to deal with horizontal identities, some families cope better than others, not everyone is capable of carrying the burden of either care or difference, and there is little agreement concerning the ethics of medical interventions, whether before or after birth.

The book opens and ends with personal stories. The first chapter tells the story of Mr. Solomon’s own childhood growing up gay and what that meant for his relationship with his parents.

The last chapter is about Mr. Solomon’s own experiences as father, again not mainstream given his identity as a married gay man. The ability to relate a general theme to one’s own experience is something for which Mr. Solomon is known, and, at one level, it is very useful.

Nonetheless, some readers may find Mr. Solomon’s comparing his own horizontal identity as a gay man to those of people with medical conditions such as Down syndrome or schizophrenia a somewhat hyperbolic approach. A similar point can be made in relation to children born prodigies, those born in families of rape victims, or those sliding into criminality.

The point Mr. Solomon is making is that all these conditions represent or result in horizontal identities and are thus to be found on the same continuum of diversity. Patience, tolerance, and respect are needed for coping; but no one is perfect and therefore, it is equally important to accept ambivalence.

As stated early in the book, “everyone would be better off if we could destigmatize parental ambivalence.” This is no different whether one is dealing with homosexuality, autism, juvenile delinquency or schizophrenia.

However important this message may be, two other equally important messages tend to get lost in the endless presentation of family narratives. The first is that coping with disability is not merely about coping with diversity or with horizontal identities. It is about living a life outside the realm of mainstream opportunities.

The second related issue is that disability is not just a family affair, an individual responsibility, but also one for society. This includes civil society as well as public policy.

It is noble and inspiring that so many families turn out strong and resilient in the face of adversity, but it is sad that they are so often left to fight their fights on their own—be it because of discrimination or simply the lack of adequate social infrastructures.