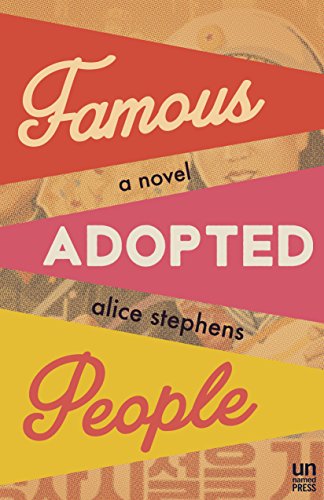 “a wild ride into the unknown.”

Lisa is a wise-cracking, hard drinking, traveling twenty-something, trying to come to terms with her past. Her best friend Mindy shares her background, and together they've been on many adventures. Finding their birth parents is one of them.

“We are a peculiar tribe, adoptees, with something that rankles at the very core of our beings, a little burr buried somewhere deep in the tender seat of our souls.”

MotherFinders has a 72% success rate at finding birth mothers and makes all the arrangements. Mindy falls into that percentage, but Lisa doesn't. Her birth mother is nowhere to be found. They make the trip to South Korea where MotherFinders, as an apology, gives her an escort, Harrison.

“I turned to the man who stood with polite deference at my elbow. He was, quite simply, gorgeous. Every feature was perfectly chiseled and in complete harmony with the other features.”

Mindy and Lisa fight, and Harrison is not what he seems. After being dumped on a dock, Lisa ends up in the last place she ever expected to find herself. Meeting her birth mother is the least crazy thing about her situation.

“So I asked, "’What is your real name?’ I was often asked the exact same question, and it annoyed the hell out of me, both because Lisa Pearl was my real name, and because I was forced to admit that I did have another name, a foreign name given to me at birth.”

Stephens nails Lisa’s angst. She's snarky, tough as nails on the outside, and jelly on the inside. The story is a wild ride into the unknown. It tries to capture what it would be like under the ultimate surveillance state with a dictator worshipped like a God. Stephens sprinkles facts throughout the story to ground her fiction. She writes a column, Alice in Wordland, and this is her debut novel.