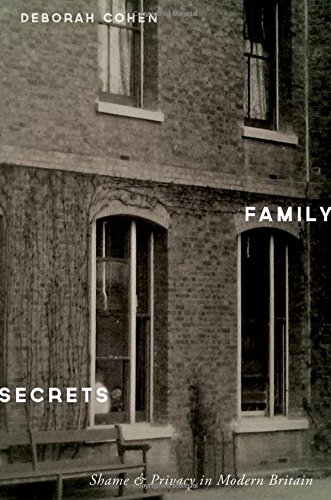 To tell or not to tell? While 21st century governments tilt to the latter, contemporary society has veered to the former.

As society norms have been redefined, what was once hidden in the closet has become not merely visible, but displayed. Difference and deviation were once hidden, now they are celebrated.

In Family Secrets Deborah Cohen explains the escalating fascination with genealogy reflecting “the desire to know and for many, a need to tell.”

To this end, she quotes the perspective of a woman of a certain age: “We are who we are, but all of our physical and mental patterns are made up from all of the generations who have gone before, and left parting themselves inside of our beings.” Greater mobility and the demise of the nuclear family has engendered curiosity about personal origins while raising conundrums of “the need to tell and the duty to keep quiet.”

The author charts her course through, the “infinite numbers of stories to tell about families, for they are all famously unhappy (and perhaps also happy) in their own ways,” the author elects “the plot-line the interplay between families and changing social mores over the past two centuries.”

In earlier times, people were far less open than today, as shame drove privacy, for “the protection secrets offered was often as much about the family’s reputation as the individual’s wellbeing.” But whereas “Keeping a secret, like keeping a servant, was one way, then, to define the middle class,” servants have disappeared and the middle class has declined. Personal secrecy been outed, so much so that, “the emotional habits of the past . . . could be kicked over, so thoroughly as to make them nearly unfathomable.”

Although, over the last decades, people in both the United States and the United Kingdom, “consistently ranked the protection of privacy as a priority,” their behavior is directly contradictory, for the proliferation of “memoirs, blogs, reality-television programs, Facebook updates, and Twitter feeds has turned the family secrets of yesteryear into the social media fodder of today.”

These shifting circumstances, Deborah Cohen suggests, mean that today, “privacy is . . . the right to tell without costs. Confessional culture marks not the end of privacy, but its broadened expression, the right to be let alone, shorn of the shame and secrecy.”

She explores “Divorce, at the price of exposing the tawdry details of the failed marriage before the public . . . mental disability, adoption, and homeless sexuality, interracial liaisons,” to consider “how families came to term with relatives who fell short of society’s standards” and to explore “what it meant to live as a family secret.”

In so doing, she examines “the important distinction between the stigmas family’s truly faired and those that they attributed chiefly to the prejudice of others. Some things mattered only if the neighbors knew about them.

“Easily mistaken for hypocrisy, this reaction just as often signaled the willingness of relatives to overlook an age-old bias accompanied by fears that others would not. This is a switch point between families and their social worlds.”

Deborah Cohen suggests that increased social and geographic mobility have motivated people, at least retrospectively, to have a greater interest in where they came from. She quotes Alex Graham, who conceived of the prime time television show Who Do You Think You Are? observing, “I wanted a career, I wanted to come to London, from early on I was ambitious and stroppy. As soon as I could, I got out of Glasgow.”

But then Ms. Cohen mistakenly suggests that “Britain’s forsaken post-industrial landscapes” are irrelevant to “the future of the country’s biotech sector” as well as to Stephen Fry’s genius. This assertion reflects misperception of how place informs genius and defines identity.

How place inspires creativity and genius is evident in the work and lives of Thomas Jefferson Samuel Johnson, Edith Wharton, Mahatma Gandhi, Winston Churchill, Carl Jung, Georgia O’Keefe, Claude Monet and William Randolph Hearst. The experience of places, generally and the connections that occur within, specifically, are a creative crucible that stimulate innovation.

As the great sociologist Jose Ortega Gossett wisely observed, “Tell me where you are from and I will tell you who you are.”

The author’s telling insight of how “we are but the recombined bits of people now long gone, whose lives—knowingly or unknowingly—we carry with us,” can be reframed: “we are the collection of our place experience, plus insights and learning of the places lived in by those from whom we are descended.”

Deborah Cohen’s’ Family Secrets is a richly researched, carefully crafted, balanced history of personal privacy told through the stories of individuals influenced by the larger context of society. This highly timely, important meditation on the sharp shift from discretion to display offers a context to comprehend contemporary cultural patterns transforming privacy.