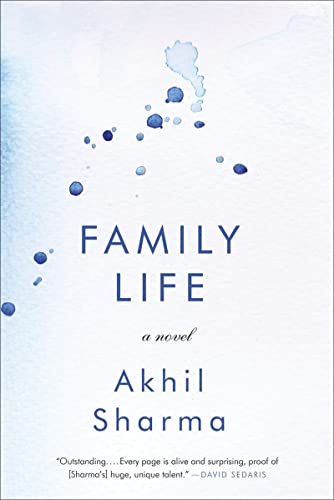 The U.S. is a nation of immigrants, and therefore, not surprisingly, the American bookshelf is filled with books about immigrants. There are classics like Henry Roth’s They Call it Sleep and Willa Cather’s My Antonia, blockbusters like Mario Puzzo’s The Godfather and Amy Tan’s Joy Luck Club, and poignant recent books like Angus Woodward’s Americanisation and  Francine Prose’s My New American Life.

Now India-born Akhil Sharma brings forward Family Life, his quasi-autobiographical novel about the experiences of an Indian family that came to New York in the 1970s, narrated by the family’s youngest son, Ajay. But Mr. Sharma’s story is more than an immigrant story about the post-modern American Melting Pot; it is also a moving story about a poor family caring for a permanently disabled son.

Indeed, much of Ajay’s best narration comes when discussing Birju, his vegetative brother. Far from being empathetic, Ajay appears callous and mean to Birju—taunting him for growing flabby and bringing down the family. Mr. Sharma lets his readers come to understand that this is the repressed grieving of a lonely younger brother—grieving for his lost best friend and protector.

Other pieces of Family Life are similarly sensitive and dark. For example, nearly of the all the Indian immigrants in the book are ignorant, or at least remarkably superstitious. Mr. Sharma also shows us a succession of Indian faith healers who visit the family to lay hands on Birju, each one more hapless than the previous.

Finally, there is Mr. Sharma’s depiction of Ajay’s family. Father is an aloof drunk. Older son, Birju, admitted into a prestigious magnet high school, suffers a terrible brain injury prior to starting. Ajay is an awkward lad who cannot measure up to Birju. Only Ajay’s mother is redeemed in Mr. Sharma’s narrative—at least when she’s not fighting with her husband.

Mr. Sharma’s narrative contains moments of coarse humor. Ajay and his friends joke over Birju’s erections. Ajay wonders if his disengaged father was assigned to this family by the government. Ajay, Mr. Sharma’s muse, also bluntly discusses the high school ethnic group hierarchy: “I preferred talking to the Jews over the Chinese or the Indians. The Jews were white so they seemed more valuable than these others.”

Yes, Family Life is a pretty sad book. The American Melting Pot is often over-romanticized. Immigrants live hardscrabble lives, often in hostile or semi-hostile environments. Many don’t succeed—they get locked into poverty; others give up and go home.

Yet despite the sadness, Mr. Sharma’s story has optimism at its core. Ajay’s family—despite the struggles—stays together and cares for Birju. Despite alcoholism and guilt, Ajay’s father continues to support the family. And Ajay’s amazing mother brings in a paycheck, manages the house, cares for an infirm son, and stays connected to the Indian community. Despite his self-loathing, Ajay is a talented and driven young man.

In the same way that The Simpsons revel in dysfunction before ultimately asserting the decency of its members, Mr. Sharma delivers us a train wreck of a family on its way to affirming the American Dream.