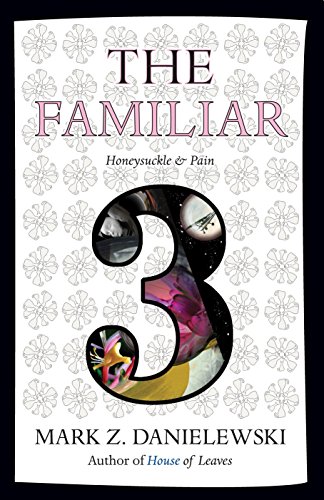 School is out and Xanther can finally spend more time with the little one, her white cat. Even three volumes into the projected 27-volume project, The Familiar, Xanther’s cat remains unnamed. Yet as their relationship grows, her cat becomes a kind of familiar. Subtitled Honeysuckle & Pain, Mark Z. Danielewski’s third installment crosses the threshold of experimental fiction into the formulaic.

Each volume follows a familiar pattern. (There’s that word again.) After a Coming Attractions section, there is the body of the novel, followed by a credits sequence (of a sort), and a vignette involving an animal as a main character. Yet is it really productive to engage in a taxonomic debate over whether The Familiar is either experimental or commercial fiction? It shows features of both.

For all of Mr. Danielewski’s typographic and aesthetic daring, what he does on the page is pretty expected at this point. But Honeysuckle & Pain’s predictable nature on a purely formal level isn’t meant as a condemnation of the book itself. Like the previous volumes before it, each contains moments of heartfelt emotion, domestic drama, and bloodcurdling horror.

Unlike previous volumes the characters are now interacting with each other. In the first two volumes, except for Xanther and her family, each character moved about within his or her own sphere. Now these previously atomized individuals collide, either through coincidence or by their own volition.

The hackers Cas and Bobby visit Anwar in his home. Cas and Bobby also confront Recluse (still in Venice, Italy) about The Orb. Each believe they have the best intentions for this enigmatic but powerful device. Xanther, her father, and her sisters attend a car show and come across Luther, the gangbanger. The only remaining outliers are Shnorkh, the Armenian-American taxi driver, and Jingjing, the addict from Singapore who lost his cat in Volume 1.

Honeysuckle & Pain pricks at the consciousness like a season of Arrested Development if it were conceived as a highbrow literary experiment. Callbacks, pop culture references, motifs, and various genres and tropes pepper the text. Özgür, the Turkish-American detective, hears about a bizarre triple murder. During his testy conversation with the medical examiner, the homicides become a grisly meditation on the concept of identity. The victims had been doused in bleach, erasing their fingerprints. Yet they were left on the scene with their wallets. Why?

The question of identity also falls back on to Özgür himself and his connection with Shnorkh. Again why? Why follow the everyday life of an Armenian-American cab driver and a Turkish-American detective? What’s the connection? Is there a connection? Or is that overlaying a pattern that isn’t there? Is this preprogrammed into the brain? Anwar is a programmer. And so on . . .

Another major plot revolves around a broken glass wolf. It fell off the mantel and the twins, Freya and Shasti, blamed Xanther. In the ensuing fallout, Xanther gets grounded and can’t go to a local amusement park. The wolf was no random bauble, but a means to extricate the family from financial ruin.

It also exposes Anwar and Astair as a common kind of Los Angeles financial hypocrite. Because of their precarious situation, they have regular sessions discussing what luxuries to cut from their lives. They are getting close to the bone, yet they don’t even consider eliminating the cost of having a housekeeper. (The intersection between finances and ethnicity reflect back on Luther’s world of poverty, drug-dealing, and personal stigma.) Even though Anwar and Astair skirt above the abyss of imminent poverty, they still seem to live in a separate universe from Luther’s posse and the Latino underclass. Returning to Astair’s broken glass wolf, the narrative also had a wolf stare back at Astair in the first volume.

Despite its global scope and epic ambition, The Familiar, Volume 3: Honeysuckle & Pain remains very much a Los Angeles novel. Danielewski has created a constellation of believable characters, each speaking in a voice genuine and compelling.

Teenage slang, Latino gang talk, hackerspeak, and hard-boiled detective lingo swirl together in an intoxicating brew. It has been slow going, perhaps a bit glacial, but the characters have now started to gravitate toward each other. The blend of lived-in domestic realism with uncanny horror create a heady atmospheric rush. Each subsequent volume reveals as much as it hides. Even the book itself offers clues in the puzzle. On the spine a tail of a cat is forming. But what is the significance of the pink triangle in the Pantheon logo? (Pink the symbolic color for The Familiar. Every time the word is used in the book it is printed in pink ink.) Even as the series exhibits a formulaic character, more mysteries wait to be unraveled.