The Familiar, Volume 2: Into the Forest 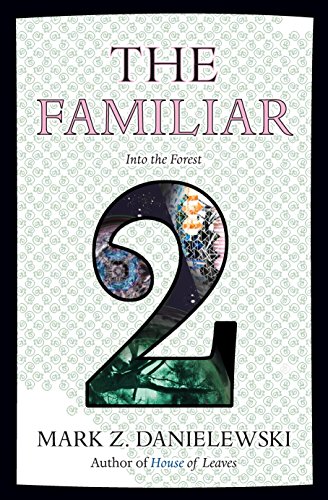 The saga of Xanther and her cat continue in The Familiar, Volume 2: Into the Woods, by Mark Z. Danielewski. But questions arise when her father Anwar takes them to the vet. The vet tells Xanther that her puff of white fur isn't a cat at all, but a dog. It isn't just born, but very old. It also belongs to someone else.

When Anwar drives his daughter to various animal shelters to give them her homemade poster, strange things occur. At one animal shelter the doors fly open, releasing the animals and causing chaos. Not only cage doors, but the doors to the back room where the animals get put to sleep, along with doors of the mini-fridge and cabinet doors. Something isn't right.

With the door opening fiasco, The Familiar creeps from domestic family drama into the realm of cosmic horror. Xanther is a child with a Whitman's Sampler of physical and emotional problems. The one saving grace is her cat. It calms her, even if it isn't technically a cat. Xanther becomes hyper-focused when taking care of her small fluffy creature. She lives in Los Angeles with her sometimes employed father Anwar, a computer programmer, and her mother, Astair, a psychology student. Along with the twins, Shasti and Freya, it is a typical American household, albeit one where logic and explanations rule the day. Problems can be diagnosed via debugging a program or analyzing a patient. This is what makes the door opening phenomenon so unsettling. It can't be explained away with a theory or a program.

Meanwhile, the novel sprawls across several weeks instead of just one day. Cops, drug dealers, fugitive hackers, and an Indonesian heroin addict once again come into the mix. Depending on the character, the chapter can either fly by or bog down. Constantly commenting on the events are three Narcons (Narrative Constructs), otherworldly beings from beyond the fourth wall. Is that the reason some chapters encounter translation issues? A chapter might be infused with ethnic street slang or foodie effusiveness. Another chapter bogs down in pidgin English or barely coherent sentences. Reception of Mr. Danielewski's literary shenanigans have been divisive.

But what he is doing is aiming for the fences. The ambitious series can only be compared to William T. Vollmann's seven-volume Rising Up and Rising Down or Roberto Bolaño's 2666. Beyond the rudimentary narrative happening, Danielewski is attempting to radically renew the power of storytelling. The Familiar can hold company with the works of James Joyce and David Foster Wallace. In this age of the ebook and Kindle, The Familiar does two important things. The first is recapturing how modern people communicate via chatrooms, apps, smartphones, and social media. The second is he recaptures this societal interconnectedness in the form of a printed book.

The radical experimentalism of social media gets treated alongside narratives of suspense, erotic ecstasy, and cosmic dread. For an ebook, the common format is a perpetual scroll. Scrolling through Kindle stories, email updates, Facebook posts, and so on. The Familiar is a still a work whose main delivery is through the page. As is expected from Danielewski, pages filled with text get followed by pages with only a sentence, a sentence fragment, or a word. He pushes farther now, with pages becoming animation panels or comics pages. The act of reading becomes a kinetic experience, engaging the ear and the eye.

For all its avant-garde cachet, he captures patois and slang with a stunning immediacy. Xanther is such a compelling character because she sounds like a problem-ridden, accident-prone, socially awkward dorky teen. The Mexican 'bangers act and sound like their real-life East L.A. counterparts.

In a memorable passage, Luther, a loyal gangland soldier, meets Teyo, a cartel jefe in a luxurious hotel. Luther reacts to the wealth and privilege of Teyo with a mixture of bewilderment, greed, and indulgence. Americans are easily swayed by displays of wealth and find worth not in virtue, but in the size of the bank account. As Teyo tells Luther over sushi, “A world awaits that neither you nor I can imagine, and I've gotten a glimpse. Makes here seem like a 7-Eleven. Like eating tuna out of a can.” Despite Teyo's story of opulent luxury, what he sees hides a double meaning.

With doors flying open without provocation, what else can't be imagined? What is the world hiding? In the second volume of Danielewski's ambitious series, strangeness abounds, characters connect, and hidden identities are revealed.