The Familiar, Volume 1: One Rainy Day in May 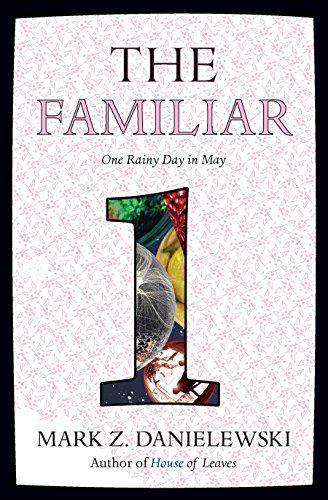 “Understanding the full scope of The Familiar is akin to counting the raindrops.”

On May 10, 2014 it is a rainy day in Los Angeles. The Familiar, Volume 1: One Rainy Day in May, by Mark I. Danielewski chronicles this day as Xanther rides in her father's Honda Element. They are on their way to pick up a therapy dog for Xanther. She finds a cat instead.

This is the plot of The Familiar, in the same way Moby-Dick is about whaling, Ulysses is about taking a stroll in Dublin, Ireland, and The Remembrance of Things Past is about eating a pastry and remembering things.

Like these three works cited, The Familiar contains multitudes. Spanning continents and focusing on nine characters, The Familiar may have more in common with the Netflix series Sense8 than the traditional novel. Mr. Danielewski is renown (or notorious) as an adventurous experimental stylist, earning fame for his previous novel, House of Leaves.

Anwar, Xanther's stepfather, regularly quizzes her on obscure words. Anwar works as a computer programmer. On this rainy day in May, he awaits news back about a potentially lucrative job opportunity. One word he asks Xanther about subitize. Xanther discovers that “to subitize” means to comprehend a number without the necessity to count it. The word has relevance with Danielewski's proposed project, since The Familiar will have 27 parts. Again, it is hard to comprehend what this will entail. Circling back to Sense8, deducing the narrative trajectory from the first episode remains elusive.

Reading Danielewski is an acquired taste, akin to plumbing the footnote-addled pages of David Foster Wallace or the hallucinatory violence in the writing of William S. Burroughs. The Familiar skirts a precarious line, teetering between pages with experimental layouts to more straightforward narrative passages.

Ironically, for a branch of literary fiction infamous for being impenetrable and pretentious, The Familiar comes across as an experimental page-turner. Danielewski's writing reflects the inner mentalities of his characters, from the Latino gangbanger to the Turkish detective to the Armenian cab driver. What happens next? This question becomes the main driver as the novel jumps from Los Angeles to Mexico to Marfa, Texas, and Indonesia.

This domestic drama coincides with the work of an LAPD homicide detective named Özgür. Of Turkish descent, he weathers a bad marriage while imagining himself among literary detectives written by Dashiell Hammett and Raymond Chandler.  Özgür's chapters simultaneously inhabit a very real, very violent Los Angeles and a literary metafictional Los Angeles.

How all these stories fit together is an unknown variable at this point, although there are hints. The Indonesian drug addict loses his cat, and Xanther finds a cat. The Turkish cop doesn't know anything about the Armenian cab driver, but the cop is investigating a grisly homicide and the cab driver assists his professor friend in preserving documentary evidence of the Armenian Genocide.

On another level, the events taking place possibly foreshadow events and powers either supernatural or extraterrestrial in origin. Since this is the first installment of a 27-part series, hints remain nebulous. Is this realm benevolent or the stuff of nightmares?

Since this is a huge canvas with numerous characters and sprawling across several genres, it is challenging to subitize the narrative. While it is tempting to want to solve the narrative, a la the labyrinth in House of Leaves, do not use Danielewski's previous novel as an instruction manual for understanding The Familiar. The word “familiar” means both the mundane and a demonic assistant. Is that the key to the work or a red herring? Like the rain, language can cleans or obscure. Understanding the full scope of The Familiar is akin to counting the raindrops.