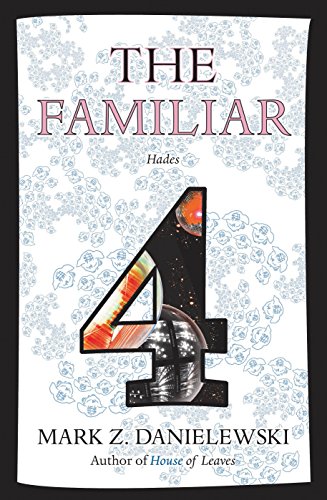 The story continues . . . of Xanther and her pet cat. The Familiar, Volume 4: Hades, by Mark Z. Danielewski is yet another installment of interconnected individuals, hidden conspiracies, and animal magnetism.

Mr. Danielewski frames this novel series as a season of television. After several “episodes” involving Xanther in Greater Los Angeles, she finds herself with the opportunity to travel to New York City. The reason for the sudden travel involves Anwar, her father, and an important job interview. In television terms Hades could be considered a “remote episode.” In a broader context, the novel focuses on the themes of migration, exile, and withdrawal.

Anwar works as a computer programmer, although he hasn’t worked lately. His employment has been sporadic and spotty at best. The family is now in a position of extreme financial vulnerability. His wife Astair continues her academic work, albeit at a disadvantage due to a humiliating rejection of her dissertation. Now she attempts to rebuild her project, this time with a concentration on how humans interact with animals.

Anwar’s upcoming interview with Galvadyne would give the family needed financial solvency. The interview itself is part-Pleasantville, part-Parallax View. The name, echoing Thomas Pynchon’s Yoyodyne, evokes both paranoia and liberal guilt. Astair is happy for the opportunity (and the needed cash), but is unhappy because of Galvadyne’s unethical use of technology (drones, surveillance, etc.).

Xanther is invited to tag with Anwar during the job interview. But leaving “the little one” (what she calls her cat for lack of a name) has made her moody and irritable. Her “cat withdrawal syndrome” has her feeling like a heroin addict without a fix. It also exacerbates her powers.

“[{curiously} as Anwar and Xanther left the last Galvadyne building {despite all of its carefully guarded territories}] Two sets of lobby security doors stood open.

“‘Stuff always breaks down. Guess that’s life,’ one of the technicians had said [smiling at Xanther {waving goodbye}].”

And despite the company wanting to interview Anwar on his programming skills alone, it is later discovered Galvadyne wants to find out more about his hacker friends Cas and Bobby. During this sojourn to New York City Xanther meets Myla Mint, famed ballet choreographer and Astair’s mother.

Other migrations occur in Hades. Özgür’s ex-wife tells him about a job opportunity in New Jersey. A possible reconciliation seems imminent, although this would jeopardize his investigation of the three dead bodies. Jingjing and Tian Li, his “auntie,” travel from Singapore to Los Angeles in search of “his cat.” During his journey through Los Angeles he encounters Luther and his gang. Jingjing is chased by Luther who turns into a wolf. Is this a case of lycanthropy or is Jingjing simply hallucinating? The Familar leaves the question unanswered.

Cas and Bobby continue to flee the forces of Recluse. In order to repulse the next attack, they gain access to a massive armory. In the text Danielewski lists every single gun in a literary homage to Neo saying he needs guns in The Matrix. Recluse wants the Orb back, but the hackers won’t go down without a fight. The pair are friends with Anwar and it is insinuated Xanther also has the ability to “scry” this mysterious technology.

The Familiar series weaves a series of interrelated narratives together. It combines different genres and styles, ranging from hard-boiled Los Angeles noir to stream-of-consciousness psychological introspection. It is referential and self-referential with typographic experimentation and excesses. At times the traditional arrangement of paragraphs shatter, explode, or blur. In other instances the words form pictures, the boundaries between word and image disappearing altogether.

Throughout Hades and in previous volumes, embedded notes will appear in the text. These will reference a previous volume or a specific address. “Isandòrno watched Ortiz, their father, break his back and die. TFv1 pp. 610 – 611.” In the next paragraph, there is foreshadowing to Volume 5, but the page numbers are redacted a la a classified intelligence report.

In a further development of references and self-references, the Familiar Wikia, an online Wikipedia curated by fans of The Familiar series, has begun to the work-intensive task of annotating every chapter from every volume of the series. The lines between a printed literary artifact and the online commentary thereof has blurred and intermingled. The back cover of Hades has 5-star reviews from Goodreads where blurbs from established print publications usually go. (Goodreads is an online community focused on books. It is also owned by Amazon.)

Despite the bleeding edge technology on display on Galvadyne, the series offers room for magic and mysticism. Tian Li is described as a witch and Xanther’s favorite ice cream flavor throws up a giant red flag pointing to the symbolism of Greek mythology. Hades melds together the modern-day real-life setting with intimations of magic, a sliver of existence still unexplained by science.

Xanther’s power involves opening doors and windows, but why? And how? How is her power related to the Orb? And how are these strange occurrences connected with the three dead bodies? As the “first season” draws toward its conclusion, questions remain unanswered. Ominous foreboding and shadowy conspiracies loom in the deep background. This is all part of something bigger, but the details remain obscure.

Danielewski has created a series evoking the best of William Gibson, Michael Connelly, and Neil Gaiman. Hades is metafictional slipstream neo-noir, a cumbersome mouthful to say but a joy to read.

At the end of the book, Danielewski proclaims Volume 5 to be the Season Finale of The Familiar. Like Game of Thrones or Sherlock or Marvel’s Agents of S.H.I.E.L.D., The Familiar kindles the craving for another episode.