Falter: Has the Human Game Begun to Play Itself Out? 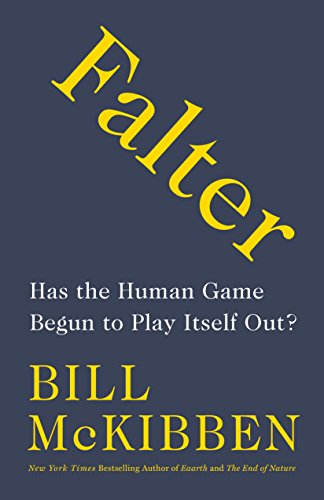 Here is a book that is terrifying-- things are getting worse than almost anybody dreamed—but is also a pleasure to read, because it is so interesting, so well written, and so infused with a warm humanism combined with a holistic, earth-centered, scientifically rational perspective.

Falter is also a call to action—local, national, and global action—by one of the first writers to raise deep concern about global warming and climate change. McKibben’s 1989 book The End of Nature warned of impending doom unless humans changed their destructive ways.

Thirty years later, Falter tells how the climate crisis has deepened and how developments in artificial intelligence threaten a human future. Many problems begin with the ways that wealth and power are distributed—and then used. Some technologies such as solar panels offer hope. So do citizens’ movements such as 360.org, which McKibben helped to found. But the balance between negative and positive forces is unclear. McKibben wrote this book because he retains hope that the positives will prevail, but nothing is guaranteed. Either way, scientists are correct to call our era the Anthropocene.

McKibben’s big idea will be familiar to most readers, but this book is not a speed-read. The first chapter, for example, starts with a history of roofing—from palm leaves to asphalt shingles—and all the ingredients and technologies required to make such products. Another chain of complexity lies behind the synthesis of Cuban and West African music to which McKibbens listens on earphones as he writes, thanks to another complex invention, Spotify. Whatever humans do, wear, eat, or think has strings that link the past to the present, and our lives to those of others in places near and far.

Many chapters begin with description of a dramatic environmental problem—for example, Alberta’ vast oil sands complex, where cannons fire day and night to keep birds away, because they would die if they landed in its poisonous sludge. Seeing all this, for McKibben, felt like a visit to hell.

Here is another aspect of pollution: a large-scale study showed that of the 4.4 million children in Delhi, half suffer irreversible lung damage from breathing the polluted air.

Pollution and environmental destruction are serious problems, but McKibben says that they do not threaten the human game as do nuclear weapons, depletion of the ozone layer, and climate change. While arms controls and the Montreal Protocol have reduced the first two threats, the forces that drive climate change grow stronger year by year and even day by day. Thus, McKibben details the heat, draught, fires, and floods that struck California in 2017–2018. His book was finished before huge fires burst out on every continent in 2019. None of this dissuaded the Trump administration from persistently whittling away at environmental protections established by US presidents from Richard Nixon to Barack Obama.

Technology is two-faced. It helps humans cope with some challenges but makes others worse. Some potential remedies do not function as hoped. On the same day that one reads McKibben’s praise for the way that Tesla solar panels provide energy in remote parts of Africa as well as in Vermont and in southern Australia, the world news reported that Tesla panels caught fire in several places and that Tesla was working, with no publicity, probably to minimize bad PR, to fix the problem.

McKibben’s epilogue addresses the hope that, if earth becomes uninhabitable, humans may find refuge on the moon or on Mars. Space travel, he shows, is very hard on the human body, psyche, and mind, while the so-called heavenly bodies are just not suitable for human life. Human colonies in outer space are just not feasible. Better to change things here so that people and other living things can survive and enjoy what they have.

How can such a book be a pleasure to read? Life is multifaceted. Resting on a Florida beach the night before he watched a space launch, McKibben observed not only on the way the rising tides pull away the sand but also how a sea turtle trundled from the ocean to deposit her eggs. This event provokes one of McKibben’s hopeful asides: some volunteers are building cages around the egg depositories to keep away the critters who otherwise would dig up and consume the eggs.

Moments of hope like this are scattered throughout the book, along with poetic thoughts about the beauties around us. One senses, however, that even McKibben fears that the forces of destruction far outweigh those of conservation.

Walter Clemens is Professor Emeritus of Political Science, Boston University. He wrote Complexity Science and World Affairs and has published in Scientific American, Bulletin of the Atomic Scientists, Technology Review, and Science. His latest book is The Republican Virus in the Body Politic: How to Reboot America.