False Alarm: How Climate Change Panic Costs Us Trillions, Hurts the Poor, and Fails to Fix the Planet 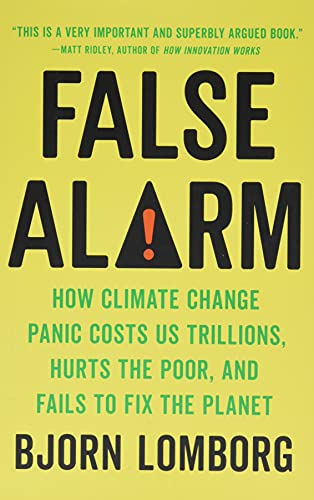 “False Alarm is a comprehensive analysis of the issues in climate change that represents a reasoned balance between the shrill voices demanding immediate change . . . and those who see no problems at all with our current environmental situation.”

With widespread fires currently raging through parts of California, Oregon, and Washington creating millions of dollars in damages, loss of human life, and extremely hazardous air quality through much of the greater Northwest, politicians and news media lay major blame for the situation on “climate change.” This catchall phrase sounds scientific and supposedly explains all the factors involved in our current dilemma. False Alarm serves as a carefully documented, well-argued challenge to that simplistic mode of thinking

Bjorn Lomborg serves as visiting professor at the Copenhagen Business School and the Hoover Institute at Stanford University. He is the author of the bestselling book The Skeptical Environmentalist and has published columns in a number of major outlets such as the Wall Street Journal and the New York Times. The Guardian named him “one of the 50 people who could save the planet” in 2008. He was also included in the list of Top 100 Global Thinkers by Foreign Policy in both 2011 and 2012.

Lomborg feels that a significant contributor to the current climate hysteria is the media. He points out many examples of poor and inaccurate reporting by major news publications and broadcasters. Selective discussion of data is widespread, with failure to include other relevant aspects of the problem leading to very invalid conclusions. Reporting of only sensational and dire outcomes tends to boost ratings and increase newspaper sales, but usually distorts the situation greatly. When all the pertinent information is incorporated into the discussion, a very different conclusion is usually the end result.

Economic analysis plays an important role in Lomborg’s discussions. He examines factors affecting the GDP (gross domestic product) of a nation. Prevailing wisdom suggests that, as the GDP increases, pollution and global warming will also increase. Lomborg convincingly shows that an increase in GDP will more likely lead to improved standards of living, better health and educational outcomes, and more efforts to maintain a healthy environment.

Renewable energy is a hot topic today, with many leaders advocating a marked decrease or total elimination of fossil fuels, to be replaced by solar or wind power. Using case studies, Lomborg shows the shortcomings of these approaches, with erratic supply and decreased energy output resulting. One study showed the problems that occurred when an entire village relied only on solar power electricity was available for only a few hours before the storage batteries were drained. Not enough electricity was generated to power the stoves in the village, leading to a reversion to wood or animal dung for cooking.

Personal approaches to decreasing carbon dioxide production (said to be a major contributor to global warming) are shown to be both ineffective and economically unfeasible. Savings achieved (for example) by walking to work instead of driving are offset by how we spend those savings—usually on things and activities that cause more carbon dioxide emissions. Greta Thunberg, the teenage activist who made the news by sailing a solar-and wind-powered boat to New York, did not save any energy since the crew that sailed the boat back across the Atlantic was flown to New York on a commercial jet plane.

Lomborg does not simply list all the problems with our current approaches to climate change (and there are many). He also explores other solutions that are more economically and practically feasible. Carbon taxes, geoengineering, improving the overall economic climate— these and other approaches can be shown to be more beneficial than the current shortsighted political approaches that we see today.

One small caution: the author uses “climate change” and “global warming” somewhat interchangeably throughout the book. He recognizes that “climate change” has a somewhat broader meaning, but does not see intermixing of the two terms as a detriment to his arguments.

The book is well- documented, with detailed notes on each chapter and an extensive bibliography. In addition, the chapters are filled with relevant graphs, tables, and illustrations to convey the information clearly.

False Alarm is a comprehensive analysis of the issues in climate change that represents a reasoned balance between the shrill voices demanding immediate change (without being aware of the practical issues involved) and those who see no problems at all with our current environmental situation.