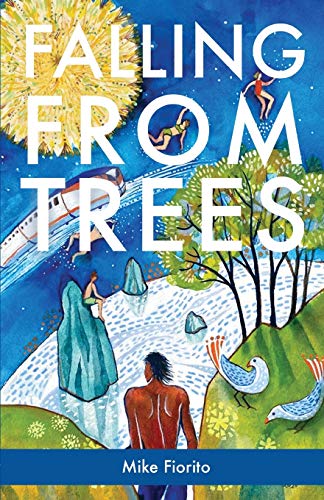 The back cover of Falling from Trees, the new short story collection by Mike Fiorito, an Associate Editor for Mad Swirl Magazine and a regular contributor to the Red Hook Star Revue, compares this work to “the tradition of Italo Calvino . . . and even Philip K. Dick,” high praise which Falling from Trees comfortably earns. This concise and compelling collection is hard to put down. Thank goodness readers don’t have to.

Fiorito introduces his collection with a quotation from Calvino that serves as an effective and lyrical hook to entice readers to explore the stories that lie within: “The more enlightened our houses are, the more their walls ooze ghosts.” Immediately after this quotation, Fiorito’s Preface consists of two paragraphs that have the charming feeling of a conversation with the author. These paragraphs are an illuminating guide to what is to come; Fiorito describes his collection as consisting of “optimistically apocalyptic tales” and explains that the stories “are related and connect to each as much through time portals as through the arteries of the heart.”

“Climbing Time,” the first story in Falling from Trees, introduces a world in which aliens have come to our planet and have “messaged Asperger’s, people who could come closest to understanding their computational concepts.” This recurring theme in the collection may for some readers conjure welcome thoughts of the iconic novel Childhood’s End, by classic science fiction author Arthur C. Clarke.

As with Clarke’s novel, these aliens have a beneficial impact on Earth: “The filth that gas, coal and oil created . . . has greatly diminished. The skies are clear again.” And the inhabitants of our planet are less alone in the vastness of infinite space: “We are now part of a network with sentient beings from distant galaxies as well.” There is figurative and literal harmony: “We are learning the great catalog of songs. . . . It turns out that the universe is made of music.”

The natural world is everywhere in Falling from Trees. Our sun can be merciless; when Fiorito writes of it, the relentless heat of a world in flames can be felt. But not all in nature is cruel. A student maintains to his guidance counselor that certain truths can be arrived at when “we discover the love of a dandelion and have compassion even for the sun.” The counselor asks how it is possible to love a weed and the boy responds “When you realize that the yellow of a dandelion is the door to the memory of your mother, you can love it.”

Fiorito’s prose is magical, evocative, mesmerizing. In the very moving “Tiny Blue Oceans,” an astronaut is in danger of suffocating when his capsule is damaged and it may not be possible to bring him home. In just a few pages, Fiorito renders the reader desperate for this tense saga to end happily.

In “Simalcrum,” Fiorito takes the reader from outer space to Lourdes, where a reluctant and skeptical pilgrim chances upon the nun who used to be his teacher when he was a child as they are both rummaging through the wares in the “Sacred Gifts” store by the shrine.

Time, space, and species merge in Falling from Trees. The protagonist in “Slow Time” is a “half-man, half-beast” in the wild who “speaks in a language of mixed grunts and gestures” and “looks like people we know, people that we’ve seen.” In “The Unending,” a man can’t sleep so he gets on an elevated train a block away from his family’s new apartment, but is “not exactly sure” where he’s headed. Another man tells him that The Ancient Curves, a book he is reading on the train, “explains how time works.” This mystical telling has an unlikely ending as a love story when the man and his wife find each other again.

It is tempting, in presenting an assessment of Falling from Trees, to share a summary of each story. They are individual gems, some connected, some told in the first person, all to be remembered and revisited. “Everybody’s Perfect, Nobody’s Human,” a story with a comedy-of-the-ridiculous tone, features a protagonist who is being given a performance review during a rock band’s show that is part of a days-long company event. One of the speakers intones what seems to be the company’s motto, “Work will set you free,” and suddenly this absurdist atmosphere becomes tainted with echoes of Auschwitz.

Not a one of Fiorito’s pieces in Falling from Trees disappoints, and he proves himself adept at delivering stories that end as can be organically predicted while others end with sometimes disturbing twists. As to his characters, Fiorito has a way of making them known, well known, very quickly.

Smith is a mystifying and intriguing character who appears in more than one story. Smith’s travels bring him in contact with striking figures who share their memories and thoughts to poignant effect. When an “old retired professor who lost his best friend” laments to Smith the passing of his one true love, he also shares that he does not “regret any of it one bit.” A quick and lovely moment about eternal devotion.

It seems to make sense that Falling from Trees ends with a bedtime story, though not a predictable one. Falling from Trees is not Fiorito’s first collection. His previous compilations include Call Me Guido, Freud’s Haberdashery Habit, and Hallucinating Huxley. How wonderful that coming to the end of Falling from Trees does not mean being left without more of Fiorito’s exceptional writing to savor.