Falling Into the Fire: A Psychiatrist's Encounters with the Mind in Crisis 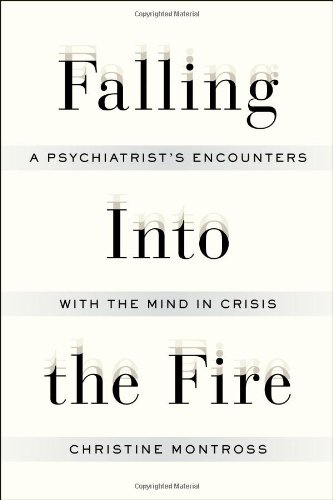 We’ve all seen them, even if we haven’t recognized them: the new mother so harried she harbors a secret desire to harm her baby; the born-again young man who embraces and promotes peace and love to the exclusion of all else, including personal hygiene and healthy eating habits; the teen who was sexually abused as a child and who finds release in cutting herself.

Many of the individuals readers encounter in this book had, at one time, led a normal— whatever normal might be—life. But Christine Montross, author of Falling Into the Fire, meets these men and women as patients in an abnormal psychological state and attempts to break through the maze within their troubled minds.

Throughout this book, she explores the human condition, trying to understand its inner workings and invites readers into her world where normalcy wears a sometimes frightening face.

Each chapter of Falling into the Fire cleverly hints at the tale within, but in many cases readers will be hard pressed to guess the story. For instance, “The Woman Who Needed a Zipper” might sound like a female with a clothing malfunction. But this chapter depicts in great detail a troubled young lady who consumes everything—yes, everything—in sight. From ballpoint pens, batteries, and a steak knife to a screwdriver, six-inch piece of curtain rod, and a pair of scissors, this woman feasts on an unimaginable diet.

To the author’s credit, she approaches this case with a different attitude than her clinical coworkers. She attempts to uncover the underlying reasons for the behavior and works toward pulling the woman back to a more normative response to stressors in her life. Readers gain insight into the case from Dr. Montross’s professional observations and interventions as well as from the careful research she does in tracking down hidden causes and triggers for the behaviors.

The book introduces terms and disorders that unless you have a medical background or orientation may be unfamiliar. Technical jargon, such as somatoparaphrenia and asomatognosia, may cause readers to stumble, but the author is quick to break down the terms to clarify the meaning.

Be prepared to learn about some unusual conditions, including Jerusalem syndrome—“an acute ‘psychotic decompensation’ that afflicted 1,200 tourists to the Holy Land from 1980 to 1993”—and Stendhal syndrome, in which victims are overcome by beauty related to art and architecture.

Dr. Montross has certainly done her homework in terms of research, written documentation, and interviews with credible clinicians. She provides many references to journals and famous cases from the past.

Some of the statistics she offers, while verifiable, are alarming. Here’s one example: a United States Department of Justice report indicates that, on average, 256 American children were killed by their mothers every year between 1976 and 1994. Specifically, that means one child becomes a victim of filicide every 34 hours.

While this book represents an impressive research effort as well as personal insight into the minds of those in psychological crisis, it also explores some fascinating, offbeat, mass psychogenic occurrences that would make great headlines for The Enquirer.

Comedy aside, as the author struggles with effective ways to treat these troubled patients, she seeks advice from a notable neuropsychiatrist who, instead of supplying a surefire treatment option, explains, “. . . you must abide with your patient.” Basically he emphasizes the importance of creating a cooperative relationship in order to establish a reasonable path to recovery.

In time, the author comes to understand what “abiding with her patients” entails. “I must face with them the uncertainty of what lies beyond. I must stand at the edge with them and peer over into the fathomless depths. If I tell my patients, as I do, that this life can be a tolerable one, that they can face their fears and their traumas, their visions and voices, their misery, then I must look at what I am asking them to endure and I must look at it full in the face,” she writes.

Dr. Montross explains the profession best when she writes, ”Medicine asks its practitioners to confront the messy, unsatisfying, nonconforming human mind. As psychiatrists, we see the mind while it careens and lists, and we are not always sure how—or whether—we can right it.”

In spite of decades of research, the human mind continues to be a mystery.

Books like Falling into the Fire offer a glimpse into this nebulous arena, some insight into what might derail the brain, and one psychiatrist’s professional thoughts on helping these patients as well as her personal reflections on the miracles of life.

Well written and quite readable, the story takes readers into the life of a psychiatrist and all the positive, frightening, and downright disturbing events that take place in a single day.