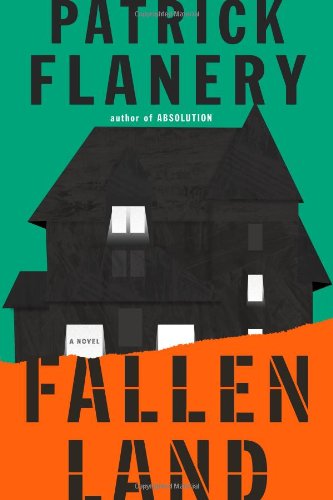 “Fallen Land is a depressing read with too much author intrusion.”

Fallen Land takes place in the Midwest and begins in 1919 with the lynching of two men, one of them a white landowner. After the lynching Poplar Farm is left to John Freeman, the child of a slave.

Shortly after the story begins, it moves to present day, with Louise visiting an adult prison. Paul Krovik is the prisoner. The animosity between the visitor and the prisoner is clear, which creates good suspense and sets up the foundation for the story.

The story then dips back into the past, where we learn what has happened to the Freeman land. Popular Farm has passed through generations of the Freeman family to Louise, until poverty forced her to sell it.

The land has been turned into Delores Woods, a sub-division of luxury housing, and, in Louise’s mind, defiled. Nothing of Poplar Farm remains except two granite stones marking an old sink hole and the burial place of two “unburied” souls.

Ghosts of the land remain. The futures of new generations are woven by threads of the past, tangled by racial disparity. Paul Krovik is the failed architect, his own personal destruction caused by failed ambition. The development he planned is half-finished, his dream aborted by the fractured economy. Krovik’s personal losses continue to mount.

Julia and Nathaniel relocate from Boston with their young son Copley to begin a new life on Krovik’s development. They have brought their own ghosts with them and their son becomes convinced there is someone else living in the house.
The story is a bleak account of loss, failure, insanity, and a preview of a dystopian future. There is an undercurrent of violence waiting to erupt, both within the land and the people living on it and the rudiments for a great thriller/suspense, and part horror. Yet the book fails to deliver.

The first 30% of the book deals with the history of the house and how it came to pass through the generations. The imaginative language and overly descriptive text slow the pace. The initial buildup of suspense is quickly lost as we plod through the past and the Freeman genealogy.

At the 42% mark, the author presents us with an example of retail multiple-choice questions, which adds nothing to the story and is redundant. More superfluous text comes in the painfully prolonged diary-style account of Copley’s school day, possibly to hammer home the point of the dystopian community; and the lengthy blow-by-blow account of the boy’s shower, dressing, and breakfast.

Then there is an entire page the author devotes to the child’s words “go away.” Yes, we read an entire page of these two words. It’s tedious. The word filler comes to mind.

The book is written with no chapters and the text switches from past to present, with blunt scene changes. All the characters are unhappy, and none of them are fascinating.

They might have been had the author given the reader a break from the continual suffering. Instead of showing us their strengths in the face adversity, we see weakness after weakness. The denouement gives us the reason Krovik is imprisoned, by which time it’s difficult to summon the enthusiasm to care.

The dystopian allegory detracted from the main plot. Without it the book would have been less erratic and a more consistent thriller. The fragmentary theme with the “unburied” souls should have been developed. Also, by ignoring Copley’s continual pleas to his parents, the author missed an opportunity to expand on one of the more interesting plot lines.

Overall, this books starts out with a terrific concept that never fulfills its promise. Fallen Land is a depressing read with too much author intrusion.