Fall of Giants (The Century Trilogy) 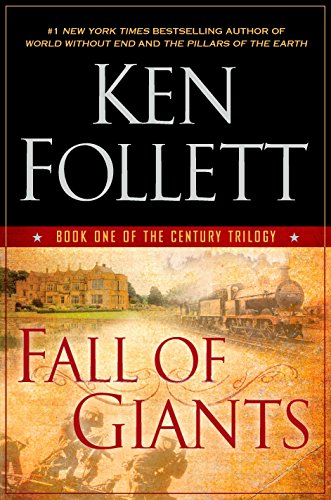 A doff of the hat to the powers-that-be at Dutton for having the courage in this economy, and the faith in Mr. Follett’s prodigious talent, to release a hardcover novel over a thousand pages long—a doorstopper that weighs about as much as a roaster chicken.

Single-handedly keeping the genre of the sweeping historical alive, Ken Follett has penned another blockbuster on the scale of Pillars of the Earth. The first installment of a trilogy that will cover the twentieth century, Fall of Giants focuses on the years before, during, and after World War I. Readers of a certain generation may wince at the subject, smelling as it does of dusty school days, but as with his other novels, Follett imbues this topic with the right alchemic mix of intriguing characters and commercial pacing, as well as a cogent theme.

It’s those intriguing characters that lead the reader trippingly through so many pages. Each of the dozen major protagonists are such solid creations—whether hero-worthy, agonizingly weak, gifted with a sense of humor, or some combination of the above—that the six-page cast list at the front of the book is utterly superfluous.

The author also displays that cinematographic ability to start relatively small—with a mining accident, or a fistfight between a provincial Russian policeman and a factory worker—and show in miniature what then proceeds to escalate into a soldier confronting his feckless officer in the trenches of the Somme, or a power struggle in Lenin’s Bolshevik Russia.

The story is far from flawless. There are some questionable creative stretches to bring far-flung characters to a scene they must witness. Occasionally, the older secondary characters come across as political or military mouthpieces, and there is a thrumming ribbon of very liberal late twentieth-century attitudes on display. In this sizable, multitextured book, these flaws are easily forgivable, like a few dropped stitches in a hand-knitted sweater.

In the end, what keeps the reader engaged is the effortless stringing of every well-played scene to a very strong and steady theme: the slow but inevitable fall of the old world aristocracy in the face of labor unity and rising socialist sentiment. It’s an issue most vividly displayed in the subtle, deeply resonant, final scene. This issue also ends with its own kind of chill, as several characters join the German National Socialist movement.

This is not an easy tome to lightly tote on the train, bus, or beach. This reviewer hopes that generations of men and women weaned on the seven Harry Potter books will download Follett’s latest into their e-reader and discover the joys of wallowing in another story that is a whole world unto itself: rich, literary, and thoroughly engaging.