Falik and His House 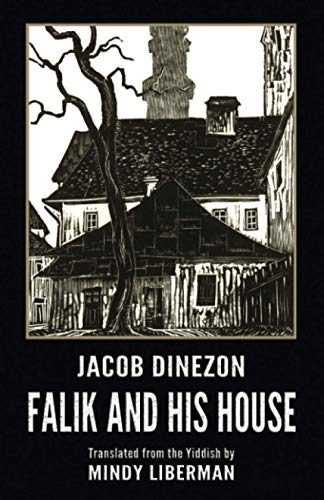 With the birth of the 20th century, Dinezon stands equal to his most successful colleagues who write in Yiddish. For a time, they all congregate in Warsaw. There, Dinezon collaborates with some of the most highly respected Yiddish authors, including Sholem Aleichem, I. L. Peretz, and Sholem Yankev Abramovitsh. Of these fabulous authors, Dinezon is perhaps best able to elicit genuine emotional reactions from readers. It is a skill that he perfects without creating elaborate passages or overly dramatic prose. His writing style is direct and very concise.

Dinezon’s stories bring the reader vividly into the sights, sounds, and smells of the small Eastern European town or Jewish enclave called a “shtetl,” during the late 1800s. Many of today’s Jews count their ancestors among these shtetl-dwelling Jews.

Dinezon’s tales are remarkable for their veracity and drama. He makes daily life in the shtetl feel tangible, and his characters express remarkably vivid emotional clarity. Eastern European Jews stand at a crossroad during this time. They face ever-more-frightening pogroms at home, and they are overwhelmed by the fear of uprooting themselves and moving to a new country. It’s a depressing polarity.

Within this trepidation, Jacob Dinezon delivers tales with a remarkably rich and vibrant image of the rapidly fading Yiddish culture. The Jews that he writes about are living in fear of their lives, surrounded by a very intolerant gentile community. They dejectedly contemplate moving to France, Palestine, South Africa, Great Britain, or America. But most want nothing more than to stay in their homes and exist in peace with their family, friends, and neighbors.

Dinezon’s stories remind us that humanity ignores the torment inflicted upon minority societies, including the Jewish diaspora. This resonates today with China’s Muslims (Uyghurs), in Myanmar, and in violence against Asians, immigrants, Blacks, and Latinx. Bigotry has always been a ghastly characteristic of the human experience.

Falik Sherman is an aging tailor living in a shtetl. His body reveals the aches and pains of growing old; so too does his house fall inevitably into disrepair. The roof leaks, the walls grow sinuous where they once stood upright, and his fence leans precariously to one side. In his growing anguish, Falik begins talking to his house, as if it were an older brother, parent, or friend. His tenants begin to complain, and many of them eventually leave.

Falik waits patiently for his sons in America to send enough money to repair the roof. But with every letter, there is no money. Instead, his sons beg Falik and his wife to come to America and share in their life of abundance and security. Falik is too fearful to leave his house and begin anew in a faraway land. To pay for a new roof, Falik visits the local loan shark. The usury is dreadful. It’s not a reasonable solution.

To make matters worse for Falik, the wealthiest man in town builds a new mansion across from Falik’s crumbling house, obscuring some of the light that formerly entered his home. The man offers to buy Falik’s house, so he can tear it down and add a new building on the property for his business. To Falik, this feels like being torn apart.

Falik falls into greater despair. He spends his days inspecting progress on construction of the new mansion, as if he owns it, while ignoring the expectations of his customers. He is consumed by hatred for the wealthy man. Falik’s business continues to slide. His sons persist in asking him to sell his house and move to America, where his daughter and her family are soon to follow. Then, suddenly, a huge storm finishes off Falik’s roof. It’s the loan shark or America. Can anything stave off disaster?

Dinezon’s themes resonate strikingly today, when so many people are unemployed or live from one paycheck to the next or whose lives are uprooted by a major storm or who fear their neighbor because in some way . . . they are different. Sound familiar? One certainly need not be Jewish to enjoy Jacob Dinezon’s stories. Falik and His House is superbly translated into English by Mindy Liberman.