The Faking of the President: Nineteen Stories of White House Noir 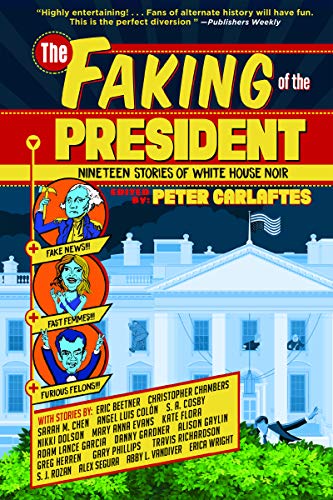 “Carlaftes’s compendium is a hysterical and delightful excursion into the American presidency from the time Andrew Jackson dove into the River Styx to avoid the Grim Reaper until President Mike Pence had to fight off Donald Trump’s attempt to keep the highest office in 2024. Remember it is just ‘fake news.’”

Students of American history are familiar with the physical and psychological flaws of our 45 presidents. George Washington had wooden teeth, and Franklin Roosevelt was handicapped from polio. John F. Kennedy had girlfriends in the White House. Woodrow Wilson was a champion of world order, but when he suffered a stroke, his wife ran the country. There is more to each story, and Peter Carlaftes has edited a marvelous compendium of 19 fictional stories that will fill in the gaps on each of these men who served in the White House, building on the facts we think we know are true.

However, we have come to realize that there are both facts and alternative facts. There are people who believe that there is no such thing as the real truth. They belittle those who would disagree with what they know as reality. They disparage versions of truth with which they disagree as “fake news.” The current president of the United States is the chief proponent of this view, and his version of truth, constantly repeated, has convinced tens of millions of Americans to follow his example.

The Faking of the President is equal parts historical and hysterical. The assemblage of authors is uniformly talented. They each start with as many real facts as are necessary and then, unconstrained by anything except their imaginations, produce delightful riffs on reality. They are fake news. For example, Richard Nixon did, in fact, meet with Elvis in the Oval Office and did make him a “federal agent.” There is no evidence, however, that they dropped acid that day. Elvis visits Dick three years after his resignation from the presidency, and the story takes flight.

We know—or, at least we think we know—that Bill Clinton fancied women both in his Arkansas days and in the White House. In chapter four, Clinton spends a day with his illegitimate son. Sure seems like a possibility, although one would think the press would have discovered his secret by now. We know that Dwight Eisenhower was a golf fanatic who had the South Lawn converted into a putting green. What we did not know was that the squirrels found the lawn irresistible. Ike contacted a specialist in removing pests by taping their frightened calls. The lone red squirrel resisted, squeaking in words that sounded Russian! Khrushchev had infiltrated the White House.

The best of the contributions to the collection is the alternative way President Al Gore would have handled the vile Al Qaeda attack on America on September 11, 2001. Gore, according to Travis Richardson’s version, managed the available intelligence with decisiveness and courage—all the things George W. Bush did not do. It is a totally believable narrative.

Carlaftes’s compendium is a hysterical and delightful excursion into the American presidency from the time Andrew Jackson dove into the River Styx to avoid the Grim Reaper until President Mike Pence had to fight off Donald Trump’s attempt to keep the highest office in 2024. Remember it is just “fake news.”