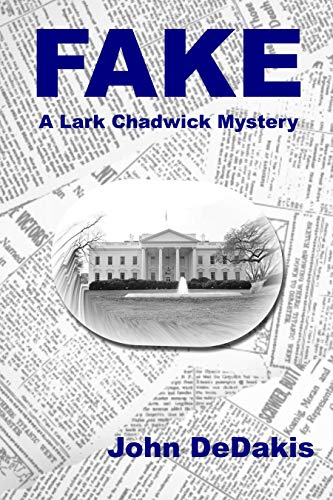 “DeDakis, a former journalist, can’t decide whether he’s writing a mystery, a political roman à clef or a YA book, and the result is none of the above.”

Twenty-eight-year-old White House journalist Lark Chadwick interviews First Lady Rose Gannon for the memoir they are co-writing when Rose collapses on camera and dies soon afterward of an apparent heart attack. Chadwick and President Will Gannon reveal that Rose was dying of pancreatic cancer but had sworn Lark to secrecy. Early in his first term as president, the now-grieving Gannon also faces an escalating nuclear crisis with Russia and Iran.

An online media site releases an unsubstantiated rumor that Rose was poisoned, and when other media sources demand more information, the White House stonewalls them.

Lark has faced several deaths in her life, including both her parents and two boyfriends. She sees Kris, a grief counselor, weekly because her last boyfriend died of a heroin overdose only six weeks earlier, and she’s still an emotional wreck.

Her turmoil increases when she meets Francine Noyce, owner of a major online news outlet. Francine offers Lark a lucrative job but insists she decide before the day is over. Lark feels uneasy being steamrolled. To make matters worse, Francine makes a pass at her, and Lark slaps her. Lark tells several of her colleagues of the attack and expects repercussions.

DeDakis, a former journalist, can’t decide whether he’s writing a mystery, a political roman à clef or a YA book, and the result is none of the above. The many characters are all types, and DeDakis inserts brief history anecdotes that may establish his credibility, but add nothing to the story. We learn, for example, that three presidents lost wives while in the White House, and how the Watergate Complex was named, but so what?

When Lark learns that she’s pregnant, she knows the father is the boyfriend who died of an overdose, but the blood-thirsty Media Bash, a fictionalized InfoWars, claims Gannon is the father, having had an affair with Lark during his wife’s illness.  Lark and Gannon both deny the accusations, but Congress decides to hold impeachment hearings on Gannon, reminiscent of Clinton’s Monica Lewinsky debacle.

The novel occurs in the near future, with several references to Trump and his attacks on news and opposing journalists. The current Russian leader is a belligerent narcissistic thug who craves attention, which may also be a shot at Trump.

The novel relies on heavy handed telling, and the completely Caucasian cast makes it feel about 60 years old, despite a subplot in which a character introduces his parents to his gay lover. The man’s parents are two of Lark’s old mentors and confidants, but little comes of this family conflict beyond the lip service.

Even though the book’s subtitle is A Lark Chadwick Mystery, the mystery element never kicks in until the last few chapters become a series of revelations by Lark and Gannon reminiscent of Agatha Christie or Rex Stout. Some of the “solution” comes out of thin air because DeDakis withholds information, and a key clue surfaces through a fantastic coincidence. Lark meets a minor character at an unexpected location and realizes he’s not who he seems to be. From this little scrap, she and the president manage to build an entire quilt—off-stage.

Lark spends most of the book reacting to events around her instead of taking initiative and driving the story. She turns to various mentors: the parents of the gay friend, her grief counselor, the President. When she finally does take action, DeDakis delays telling us what it is until the Christie-like reveal at the end. It’s cheating. It also leads to an ending so happy and positive that it’s hard to believe.

The book is good mind candy, but lacks the substance most readers of political thrillers have come to expect.