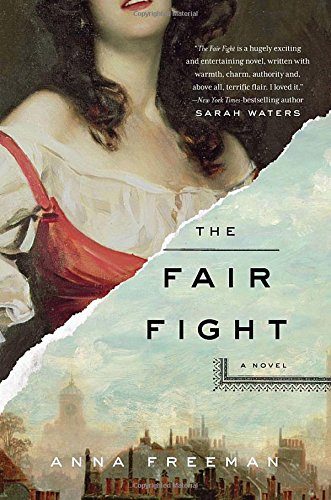 Anna Freeman’s The Fair Fight is a dynamic and colorful work of historical fiction. Eighteenth century England opens its brothel and manor doors as each character takes the stage in this exciting novel.

Freeman’s language is beautiful and powerful, placing the reader right in the midst of the activity, private and personal to everyday and common, as each section of the book changes between a trio of narrators, Ruth, Charlotte, and George.

Ruth is a female boxer brought to the ring by a brothel frequenter who has purchased the exclusive rights to her pretty sister in their mother’s business. Thinking she would always be a servant in the brothel, Ruth discovers a new path during a fight with her sister—the cullies witness the fight, lay down bets, and Ruth wins.

The enterprising Mr. Dryer swiftly buys rights to Ruth and takes her into various pubs and fighting rings to make his money off this pugnacious woman able to hold her own against men three-times her size. Ruth is no fool and recognizes that she is being kept by Mr. Granville Dryer and begins to save money toward the day she can make her own way in the world. The money she saves becomes especially important when Tom, Ruth’s husband, becomes indentured to the brothel and when the world around them begins to crumble and food becomes scarce.

Charlotte has been scarred by smallpox and left to live with her weak-willed brother Perry, when all the rest of their family dies from the disease and Perry inherits the fortune and land. Never content with her passive lot in life, Charlotte attempts to find ways of escaping from Perry’s capricious and cruel handling.

Perry enjoys tormenting Charlotte and begins to threaten all that she loves when he begins to feel his closest friend, George, is paying her more attention. Charlotte takes to drinking, though not as much as her brother, in order to deaden the dullness of her days. During an excursion to a fair, Charlotte witnesses the female boxer, Ruth, in action and a ferocity and boldness slowly awakens in her, soon to be brought out by Ruth herself when they meet.

George is a pitiable character and also a fool. Unable to truly care for himself, he drifts through life, attaching himself to anyone who might have him or be of use to him. Though not intentionally cruel, he does disrupt people’s lives with his beautiful face and flighty behavior.

Winning over Perry at school, they become inseparable life companions, for the most part—George does, more than once, seek his independence from the rumors that circle their relationship and the petty tyranny with which Perry rules his household where George comes to live and run Perry’s finances. He chases after Dora, Ruth’s sister, but only to be usurped by Granville Dryer, and then he chases after Charlotte, hoping fortune might lie there, only to be bested by her brother Perry.

It is through these three narrators readers witness the unique lives of the brothel, tavern, boxing ring, and manor. Other characters who play large roles are Dora, Perry, Granville, and Tom. Though they aren’t given their own chapters to narrate, the readers will feel as if these characters were telling their stories through the eyes of the narrators who are in some way connected with each of them.

Tom, Charlotte’s husband, and Dora, Ruth’s sister, are as much pawns of Granville Dryer’s self-interested game of life as is Ruth. Perry, weak-willed and pathetic, brings to mind Tolkien’s character Gollum. Perry is pitiable as well as loathsome, but he is a creature of circumstance and upbringing who failed to rise to life’s occasions. Dora is clever as her sister and seeks to improve her own life as she can and with what she has to offer.

This is an absolutely phenomenal book. Whether a reader likes boxing or not, well-written characters, perfect pace, and a unique plot hold these pages together. Though a longer book than some, the reading is easy and entertaining. Readers will become invested in the outcomes of Ruth and Charlotte’s lives and cheer them on to the end.