The Failures of Ethics: Confronting the Holocaust, Genocide, and Other Mass Atrocities 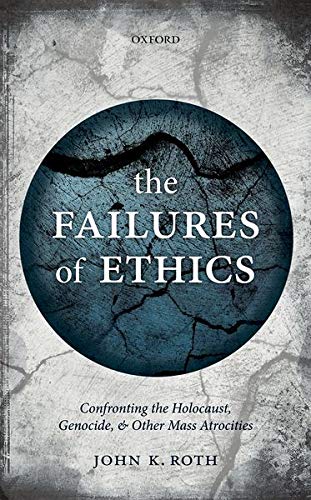 John Roth is one of a handful of highly respected and insightful authors on the topic of genocide. The Failures of Ethics is a testimonial to Roth’s extensive research and analysis about a topic with significant implications for humanity’s survival. This masterful book/textbook offers a critical exploration of the vulnerability of ethics and why genocide remains a persistent possibility for vulnerable groups and cultures.

Ethics, the knowledge of right and wrong, is the foundation of all civilizations. Ethical responsibility is the purview of each member of that society. Roth examines genocide, especially the Holocaust, for its root causes. He helps the reader understand why some people are more susceptible to ethical failures. The result of this book is a thoughtful discovery of issues and assumptions, hopefully leading to action that fosters resistance to immorality and collaboration rather than conflict.

Roth postulates that honorable intentions and the depersonalized advances of civilizations have become incoherent and subverted by the “accumulated ruins of history.” We see that respect and honor for those who save lives and resist atrocity must be valued so that future societies can avoid persecution and genocide. Roth clearly posits that impressive philosophical arguments used by the nefarious can result in prejudice, oppression, and genocide, just as easily as it can be used to advance human rights.

He also reveals that ethics can become a valuable commodity, “subject to misuse and perversion.” He agrees that genocide exists for one or more of four different conditions: “1) to reduce or eliminate a perceived threat from a designated group, race or religion, 2) to spread terror among real or potential enemies, 3) to acquire economic wealth, or 4) to implement a particular belief, ideology or theory.” In Roth’s view, nothing matters more than how we react to and deal with failures in ethics.

Despite the human propensity for violence, persecution, and genocide, we can escape it in the future. To accomplish this, we must openly praise the courage of those who sacrifice to help the persecuted; we must always study the actions leading to past genocides and find a way to foster a new and powerful commitment for equality and human rights.

Indifference, Draconian ethnic beliefs, and the failure of differentiation between right and wrong have led religions, nations, and cultures to collapse into genocide or to collaborate and avoid confrontation. Roth delivers a focus on the inadequacies of reason, decision-making and actions that incite humans to perpetrate vast harm. He reveals how ethics can become vulnerable to misuse and perversion; and that no simple reaffirmation of ethics will prevent future genocides.

We learn that only a spirited commitment and political will can alter the human propensity for destruction, brutality, and genocide. Roth emphasizes that only through respect and honor can atrocities be avoided and lives saved. His insight is thoughtful, based upon empirical data and written in a very clear, evocative style.

Roth engages the reader with profound conclusions that are well-designed, intuitive, and at times deeply reflective. He views our failure to end genocides through a particularly clear lens of perspective. This book will allow teachers and students to confront immensely critical decisions about morality in an age still troubled by persecution of the innocent.

While many philosophers insist that their peer-reviewed conclusions are of a certain veracity, Roth encourages the reader to challenge existing concepts and to foster wide-ranging discourse about preeminent ethical conclusions.

Roth concludes that we neither should nor can eliminate the darkness into which genocides plunge us. But we can stand in solidarity with those who resisted the Holocaust and mass atrocities—and we can join those who resist them today. Facing the brutality, persecution and slaughter inflicted by the Holocaust and other atrocities reveals the failures of ethics as no other events can. Deep within that resistance, joy and satisfaction for the human spirit can be found.