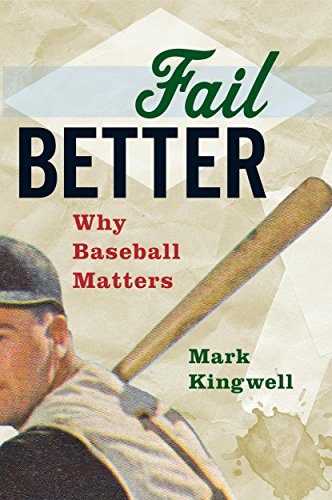 Baseball has served a distinctive slice of the American social experience for over 170 years. It has been the subject of countless fiction and nonfiction books, movies, plays, and music. The game offers a pleasant way to spend an afternoon as a spectator or as a participant. To play the game, you don’t need to be as tall as a tree or as strong as an ox; you just need to learn the rules and be willing to participate.

Mark Kingwell, a distinguished Canadian professor of philosophy and an avid fan of the Blue Jays club of Toronto, has written a delightful book about baseball that combines metaphysics, personal memoir and anecdotes, literary references, and a limitless appreciation for a pastime that has brightened his life. His academic career has been devoted to crafting books on modern philosophic issues, but in Fail Better: Why Baseball Matters we see another Kingwell, one who uses his learning to write with enthusiasm about his passionate relationship with baseball.

Baseball literature falls generally into two categories: the serious, historical, and analytic work (see George Will and Bill James) that can be a challenge for the everyday fan, and the “gee whiz” books about a baseball hero, normally the biography of a player ghostwritten by someone else. Kingwell combines both approaches in this book. There is philosophy—the work of his professional life— discussed in accessible language to satisfy the inquisitive and his pleasant memories that remind most readers of their personal experiences with the game.

Kingwell’s prize-winning A Civil Tongue: Justice, Dialogue, and the Politics of Pluralism, published in 1995, shows the author at his theoretical best, offering a reasoned analysis about organizing public debate in a pluralistic society. Like many philosophers, Kingwell finds the goal of achieving justice elusive, although civility is an essential prerequisite. By comparison, justice is not a goal in baseball. The best teams and the best players do not always prevail.

The leitmotif of Kingwell’s work is that failure at this American pastime is inevitable. Even the best teams in baseball lose one game for every two they win. Each game is an exercise in personal failure. The best hitters in the game are successful only three out of ten times at bat.

Baseball matters only because we make it so. Unlike Rousseau’s social contract— those unwritten set of principles by which society is organized—baseball was a game first created by a committee of young men in New York City. They yearned for organized exercise and composed the Knickerbocker Rules, named after their social club. Three outs per inning, three strikes per out, a playing field in the shape of a diamond, and the ultimate goal of returning “home.” The Knickerbocker rules were reprinted widely, and the game took root, first on the East Coast and eventually nationwide. Today’s game essentially follows the Knickerbocker provenance.

It is always pleasing to read a book about a familiar subject written by a scholar in another field who applies his or her skills. It adds another layer to our understanding of baseball.

As a philosopher, the author presents his wide-ranging insights in chapters entitled, for example, love, wisdom, nostalgia and beauty. Kingwell’s two chapters comparing “territorial” games (like football) and “linear” games (like baseball) are a splendid fusion of philosophy and sports theory. He writes fluently when in his philosophic mode and pleasantly when he relates his personal history with the game. He sprinkles in discussions of baseball scorekeeping and a full helping of sentimental recollections of his personal exploits. He also ranges far and wide into popular music and literature. It is an enjoyable mixture.

It is possible that some might find that Kingwell has loaded too much on to his baseball platform. It is, after all, only entertainment. But for those fans on the northside of Chicago and throughout New England who were recently freed from decades of baseball despair, the game provides a true measure of life in all its fullest. Kingwell’s insights ring true.

Although failure is inherent in the game, baseball remains irresistible. The game of base starts fresh each spring with hope for success sprouting with the buds on the trees. We have “waited until next year” for a long time.  Perhaps “next year” will come this year.