The Faceless Old Woman Who Secretly Lives in Your Home: A Welcome to Night Vale Novel 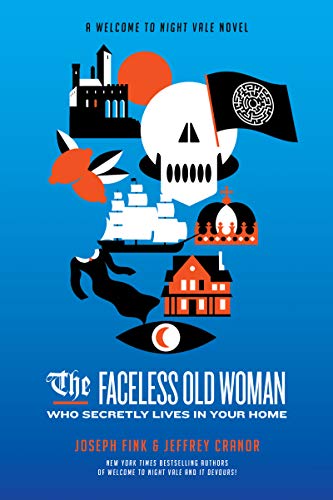 This is the authors’ third book taking place in a fictional community in America called Night Vale, where ghosts, angels, aliens, and government conspiracies are adroitly brought to life. The authors also have a podcast in the same name. Here, a faceless old woman lives in every home, haunting residents, sowing discord, punishing gratuitously, and cozying up to newborns and children. In this story, she haunts a man named Craig, orchestrating the dreaded details of his life and especially his death. She has a deeply hidden and intense motivation to murder select individuals throughout many generations, which only becomes apparent near the end.

This lavish, dark novel carries the reader across centuries in time and place, from contemporary America back in time to Napoleon’s Europe and the old woman’s childhood. There, the old woman lives with her father (her mother died in childbirth) in a beautiful mansion overlooking the Mediterranean. There we find many deserted coves and inlets used for smuggling. Her father and his partner-in-crime, Edmond, raise the old woman as best they can in caring for a small child.

But as childhood changes to adolescence, her father is murdered, and the beautiful chateau on the Mediterranean is burned to the ground. Her profound love for her father turns into an even deeper need to enact revenge upon her father’s murderers. Trusting Edmond completely, the old woman becomes captain of a pirate ship, smuggling on behalf of a shadowy organization called the Labyrinth. She believes that leaders of the Labyrinth were responsible for her father’s death. The old woman plots to rise up into the higher ranks of the organization and murder the men who collaborated to kill her father. There was just one problem. They (the Labyrinth) were not responsible for her father’s death and the burning of their home. She was being manipulated. But by whom?

The Faceless Old Woman Who Secretly Lives in Your Home is an expansive, capricious novel in which the authors build the story’s drama by exchanging and contrasting contemporary American life in Night Vale with 18th century Europe and her ongoing plot to seek revenge. Along the way, she befriends a handful of very colorful characters, each with unique talents useful to her plot to murder those who killed her father.

The authors employ relentless dramatic tension that thrives within the major characters and the situations enveloping their various acts of revenge. They pay service to just the right amount of character development, without losing theatrical speed or becoming stagnant.

In the process of seeking revenge, the old woman unknowingly murders her own aunt and becomes a marionette to the vagaries of her evil adversary. As captain of a pirate ship owned by the Labyrinth, she wreaks havoc on many European ports and cities, killing and stealing for the chance to murder those who killed her father.

But the truth is carefully concealed by these talented authors. Most of the people that she encounters are not at all who they seem; one in particular drives her every move with ease and malicious intent. For a lifetime, the old woman and her talented and loyal friends go from port to port and from city to city, passionately committing crimes in an effort to gain recognition from Labyrinth leaders.

The reader need not have read the previous Night Vale entries or subscribed to the podcast to completely enjoy this book. This novel, like the town called Night Vale, is sinister and foreboding. It is filled with treachery, duplicity, love, passion, and resounding, pulse-pounding dramatic license. Told in first-person singular, this novel is terrifying, thrilling, humorous, well-paced and completely unpredictable. The ending will have readers finally realizing that they, too, have been duped.