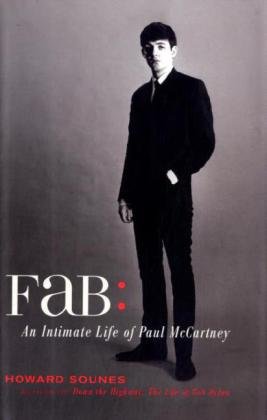 Webster’s dictionary defines the word icon as an object of uncritical devotion. This term can therefore be liberally applied to the great and powerful Sir Paul McCartney, who has had not just a small circle of groupies, but legions of devoted fans for the better part of half a century.

With such a storied and extended career, it would not be a huge stretch of the imagination to say that millions of words have been written about the former Beatle. So why does the world need yet another biography about the man who would be Paul?

Start with the songs themselves. McCartney was a brilliant songwriter, with or without John Lennon. His music seems to resonate differently with each person who hears it—even if it’s only discussing something as simple as a “Silly Little Love Song.” The author could have spent the entire book talking about just the songs, but the songs have to come from somewhere, and this work gives us all the nitty gritty details.

Brought to you by Howard Sounes, the author who also gave us the comprehensive tomes Down the Highway: The Life of Bob Dylan and Charles Bukowski: Locked in the Arms of a Crazy Life, Fab: An Intimate Life of Paul McCartney delivers on every promise it even thinks about making.

Starting with the birth of Sir Paul, the book discusses, in detail, his school years, the period when the Beatles were just beginning to play together, and their German shows. McCartney fans will enjoy hearing some of the never-before-told stories about his family. The Beatles are done halfway through the narrative, and yet so much more story is still on its way.

After the fall of The Beatles, Sounes transitions into Paul’s life with Linda and the kids. Things are not always pleasant, and the author does not pull any punches, especially when discussing the handful of drug busts and other court cases the McCartneys faced (some self-perpetuated, some brought by outside parties). It was not always a great thing to be (or have been) a Beatle, but the author handles the rougher topics with a professionalism that attempts to be as unbiased as possible.

Sounes’ narrative writing style is easy to read. Instead of feeling like a dry, academic work, the book reads almost like a novel. It is hard to imagine that many of the people in the story are still living, with a few famous notable exceptions. The 500+ pages do not necessarily fly by, but the tale told is worth the time it takes to tell it.

Webster’s also defines icon as a conventional religious image, and even though many screaming girls worshiped at the Beatles star, Paul McCartney would be the first to admit he was (and is) no saint. He was just a kid from Liverpool who, thanks to a lot of hard work and a little bit of luck, happened to have a great life and inspired countless numbers of people. Whether one is 6 or 64, the music of this magician speaks to generations, and thanks to works like Sounes’ Fab, these generations will know the good story behind the great music.