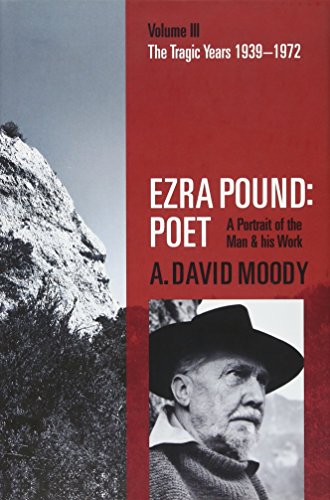 Ezra Loomis Pound cemented his literary career as one of the chief architects of Modernism. He edited T. S. Eliot's The Waste Land and shared Eliot's distaste of the spiritual bankruptcy and shallow materialism that seemed to permeate society in the wake of the First World War. Without sounding hyperbolic, during his long career Pound knew everybody and influenced everybody. At his apogee, he cast a shadow similar to David Bowie's in the music world. Yet Pound did not end his career without mishap and misinterpretation.

Fiercely opinionated, prolific, and eccentric, Pound also championed the regime of Benito Mussolini and spewed coarse anti-Semitic diatribes over Italian radio during the Second World War. Did that make him a traitor? Did his anti-Semitic outbursts, present everywhere from his private correspondence to The Cantos, leave a permanent blemish on his literary legacy? Can his work be separated from his political opinions and racism? Should it? A. David Moody's third installment of his biography of Ezra Pound seeks to answer these questions. Ezra Pound: Poet: Volume III: The Tragic Years 1939–1972 chronicles Pound's life from his Italian residency prior to the outbreak of World War II to his death.

Before an analysis of Mr. Moody's biography can begin, it should be prefaced with two specific events. In 1945 the author Robert Brasillach was executed for his collaboration with the Vichy regime. His work was characterized by its vicious anti-Semitism. In 2006 Mel Gibson was pulled over for possible drunk driving. He argued with the arresting officer, saying, “[T]he Jews are responsible for all the wars in the world. Are you a Jew?”

Throughout The Tragic Years, Moody does his best damage control to soften the racist edges of his subject. The first epigraph in Part One is the U.S. Constitution's First Amendment. The problem with Ezra Pound (and there are many) involved his specific circumstances. He sympathized with Mussolini's Fascists yet never renounced his citizenship. He also saw his radio addresses as instructional to its American audience.

In addition to his personal obsessions with good government and monetary reform, he saw his propaganda efforts not simply as a participant in the Second World War but informing his audience about “the perennial war”—the one fought by good citizens against the usurers and monopolists who profit from war. A noble thought if the so-called perennial war had no toxic anti-Semitic content. Like a dog that refuses to let go of a bone, Pound would champion battling against the Jews and usurers for most his remaining years. It would leave a black mark on his literary legacy no matter how sympathetic the biographer.

A. David Moody is the Professor Emeritus of the University of Hull. He has edited a volume of Ezra Pound's letters to his parents and has authored books on T. S. Eliot and Virginia Woolf. His third volume of Ezra Pound: Poet. A Portrait of the Man and his Work follows Volume I: The Young Genius 1885–1920 (2007) and Volume II: The Epic Years 1921–1939 (2014). A comparison could be made to Leon Edel's monumental five-volume biography of Henry James and the unfinished biographical sequence of Lyndon Baines Johnson by Robert Caro.

The Tragic Years trace Pound's experiences in Italy before, during, and after hostilities. Moody then sets the stage for Pound's hearing, where he avoids a trial for his alleged treason but gets transferred to St. Elizabeths Hospital in Washington, DC. Throughout the legal proceedings Moody reiterates with barely concealed outrage about how Pound was railroaded by his lawyer and abandoned by his literary peers.

Moody does thread the needle, maneuvering between Pound's actual utterances and how his attitudes shaped negative public opinion. “One might think that his [Pound's] fear showed a grave lack of faith in the American justice system, given that Pound was not under indictment for anti-Semitism, that anti-Semitism was not an indictable offense, and that indeed expressions even of anti-Semitism had to be allowed under the First Amendment.”

For all of Moody's many gifts as a biographer and literary critic, he does have occasions where he skewers himself with his own pedantry. Granted, what he said is technically correct and anti-Semitism was neither hidden nor abnormal in the United States during these decades. But Pound was making these racist broadcasts on foreign soil in the pay of a foreign power, even if he made it explicit he was a “free agent” and not an employee of Italy's Propaganda Ministry.

In the end, Pound's lawyer Julien Cornell opted for treating Pound as insane for his views. Moody makes clear how Pound did hold unpopular views and possessed rampant egoism, delusions, and idiosyncrasies. That didn't make him insane.

After enduring a miscarriage of justice, Pound endures over a decade in St. Elizabeths Hospital. Despite the filth and safety concerns, he is housed with other criminally insane inmates. Yet he continues to write his Cantos, as he did in the outdoor detention facility in Pisa. Moody creates a fine balance between a long-form biography of Pound's life with an adept literary criticism.

Outside of specialist works, Tragic Years offers an in-depth analysis of Pound's later Cantos. Because Pound's epic involves multiple languages, obscure references, and formal experimentalism, every interpretation will be different.

This biography, for all its grandeur and failings, frames itself as a portrait. The portrait captures its subject as much as it exposes the artist who created it. The challenge for any biographer is to remain objective, marrying an inventory of facts to narrative demands. Moody is sympathetic to Pound's plight, but how sympathetic is too sympathetic? It is a loaded question.

After the Bollingen Prize scandal in 1949 for The Pisan Cantos, the creative class sympathetic to Pound worked to construct The New Criticism, its mandate to appreciate an artist's work divorced from its political content. It helped to ameliorate the negative firestorm around Pound's poetry, but in light of the recent events it seemed intellectually disingenuous. The political views shouldn't eclipse or supersede a creative work, but it shouldn't be denied either.

During his detention in St. Elizabeths, he accrues a coterie of students and sycophants. These range from poets to racists. Pound becomes the center of a very peculiar universe, holding court on the grounds of an insane asylum. It is during these years that The Cantos take a turn for the willfully obscure. Decoding the text becomes its own small industry within the groves of academe.

It is only after he is released and makes a slow recovery does Pound show any regret for his past actions. For a poet who began his career as a second-rate Symbolist, he eventually meets with Allen Ginsberg. It is a freighted meeting, yet captures a passing of the torch. The poetic light passes from Algernon Charles Swinburne to T. S. Eliot to William Carlos Williams to Allen Ginsberg. (Although the realities are much too complex for a simplistic linear genealogy.)

Pound does become a tragic figure, at least in the sense of the ancient Greek term. Like Oedipus he showed hubris but was undone by the very fault he thought was an advantage. A lifelong advocate of good government and sane monetary policy, he ended up partnering with a murderous authoritarian regime and its Nazi puppet state successor.

His economic thought was forever poisoned with anti-Semitic statements both archaic and offensive. After the defeat of Nazi Germany and Fascist Italy, the horrors of the Holocaust made these statements obscene and woefully misguided.

He possessed an erudition and respect for global literature not seen since Goethe, yet his radio addresses for Italy during the Second World War reeked of a delusional stupidity. He was uninformed but not misguided. He was a rabid anti-Communist and a radically individualistic thinker, but he was not insane.

Pound did suffer from his own imp of the perverse, an obsession that eventually turned self-destructive. The racialized views on economics turned a cosmopolitan poet into a cantankerous quack. A. David Moody's biography of Ezra Pound, although not perfect, will stand as a landmark work of literary biography and a valuable resource to unlocking the mystery and obscurantism of The Cantos.