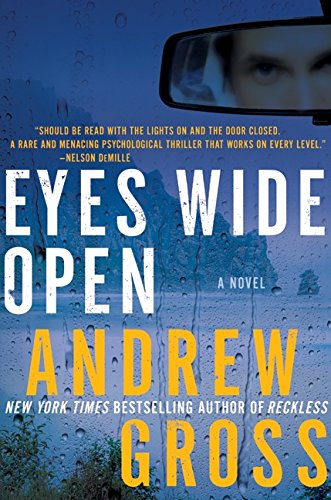 This—the process of assimilating the emotional impact of a wrongful death—is what author Andrew Gross hands us in his suspenseful thriller, Eyes Wide Open.

Jay Erlich’s sad journey from New York to California to comfort his brother, Charlie, and sister-in-law, Gabby, after the loss of their son, Evan, begins with the pain of trying to understand the loss of a young life to a senseless accident. But the second and third days of his stay quickly turn into confusion and fury as Jay uncovers reasons to question the rush to call the death anything but what it was: homicide.

After much cajoling, Jay enlists the reluctant help of Don Sherwood, the only police officer willing to give him even a cursory nod. Convincing Don that there may be more to Evan’s death than suicide proves to be challenging, yet Jay perseveres. And the further he digs, the more involved he becomes with Charlie’s dark past until he arrives at a point of no return.

Old murders begin to surface, their causes coming into question; new deaths occur with a violence similar to that used by one man—a man who has been in prison for over three decades. Russ Hovnanian, a cult like figure responsible for the slaughter of a half dozen innocent people in the early 1970s figures into Evan’s death with terrifying accuracy and a decades old relationship —deaths, follows the path that leads through Charlie to Hovnanian and two conspirators, and in doing so Jay places himself and his own family in jeopardy.

Mr. Gross lays out enough clues to solve the puzzle, but keeps his protagonist one step ahead of the reader throughout the entire story. He hooks the reader with his opening chapter and the death of Evan, but then the story slows somewhat until the characters are all in place. To his credit, once the situation is laid out and the story starts to move, Mr. Gross provides tight chapters that leave the reader always turning the page, ready to absorb the next clue.

The only drawback in the telling of the story is Mr. Gross’s treatment of the narrator’s point of view. He moves back and forth from first person to third person throughout the entire story, and just as we get under Jay’s skin and literally become him, we are pulled out and placed on the shoulder of a number of other characters—to go along for the ride. Within another chapter or two, we are plucked off those shoulders to be thrust back under Jay’s skin. This makes for some challenging reading, but the story itself is well put together and all of the loose ends are tied up nice and tidy at the end.

One, two three—pain, confusion, and fury—all good reasons to pick up the book and go on this journey.